Aerondight is a silver sword used in fighting monsters, and is relatively ineffective against Άνθρωποι. It can be received only in Κεφάλαιο IV.

In The Paths of Destiny, according to a quest phase titled "The Sword", the blade is exceptional: "light, sharp as a razor, and fits the hand neatly". In the same entry, it is said that the blade "has a destiny of its own. Time will tell what that destiny is". Possibly referencing a sword with a similar name that was given to Lancelot by the Lady of the Lake in Arthurian legends.

Can neither be bought nor sold 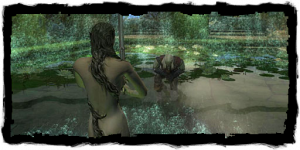 Lady of the Lake knights Γκέραλτ after he fulfils her wishes, and gives him this blade along with the words: "Take this sword as a sign of my favor. Once the blade of a great warrior, it lay in the depths for ages, awaiting your arrival."

Aerondight's state after being imported into The Witcher 2: Assassins of Kings.