Αλληλεπίδραση χαρακτήρα happens primarily through dialogue in The Witcher. One could, of course argue that swordplay is also character interaction, but for the purposes of this article, we will limit the discussion to peaceful, at least initially, interactions. Below is a list, with icons, of the kinds of character interaction that can be initiated by speaking with game characters, or NPCs. This is how Γκέραλτ interacts with the various game characters he meets along his Path. 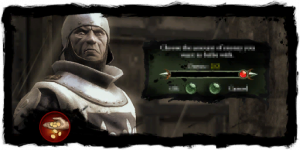 Occasionally, it becomes obvious that a few orens would ease things along. When such an opportunity presents itself,

Tip: Characters respond differently to bribes and some might take offence if your bribe is too modest.

Διαγωνισμός Ποτού are a concept that I think is unique to this game, but I could be wrong. They can be quite amusing, but they can also bring rewards in the form of valuable items, or information. So indulge!

Fistfights are not just an option to win some extra orens and fame, they are also a quest in the game. They mostly happen in Πανδοχεία και ταβέρνες, but can crop up anywhere a misunderstanding can happen.

For casual fistfights to earn a few extra orens:

Note: Fistfighters will not accept bets that are over double of the initial bet. (E.g.: Initial bet is 20

. The fistfighter will not accept a bet over 40

For quests and misunderstandings (i.e. where no wager is in question):

The weapons that Γκέραλτ begins the game with are adequate, but not great. As he swashes and buckles his way through Vizima and environs, he finds Ρούνοι‏‎ and pieces of meteorite ore. These can be brought to a blacksmith to be used to either imbue his silver sword with magical abilities, in the case of runes, or have a new steel sword with magical properties forged, in the case of meteorite ore.

Note: The forge icon also allows you to buy and sell items in addition to the blade enhancement service. 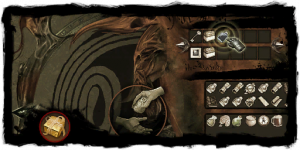 There are several reasons to give gifts in the game: for information, in exchange for some other more desirable item, for a service, or just to be nice. To give a gift:

Tip: Win the favour of other characters by giving them gifts.

These activities often, but not always, happen in the same place, Πανδοχεία και ταβέρνες, in the game. There are also lots of places that Γκέραλτ can meditate for free, like campfires and friends' places.

This icon is used to pay a sum of money in a legal exchange, as opposed to a bribery situation. Typically this is for a service. The Ferryman wants 5

to cross to or from the swamp. This is the icon that is used to effect that transaction.

There are plenty of opportunities to play dice poker in the game. Whenever a game character plays poker, this icon appears in the conversation screen. Just click on it to play. There is also a perfectly good article devoted to the subject: 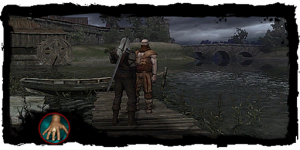 Signet rings are useful for gaining entry into some places, or just passage to others. When you are given such a ring,

When confronted with an opportunity to use a signet ring in the course of a conversation, and provided of course that you have the necessary ring,