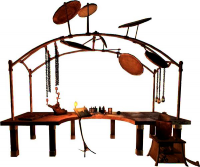 In the history of science, alchemy from Arabic (al-kimiya) refers to both an early form of the investigation of nature and an early philosophical and spiritual discipline, both combining elements of chemistry, metallurgy, physics, medicine, astrology, semiotics, mysticism, spiritualism, and art all as parts of one greater force. Alchemy has been practised in Mesopotamia, Ancient Egypt, Persia, India, Japan, Korea and China, in Classical Greece and Rome, in the Muslim civilization, and then in Europe up to the 19th century — in a complex network of schools and philosophical systems spanning at least 2500 years.

The Witcher is set chronologically in the year 1270, according to the narrator in the opening sequence, but this date is incorrect — the game is actually set in 1273, five years after the end of the Nilfgaard Wars, which ended in 1268 and during the second Catriona outbreak, which started in 1272. Europe is also definitely the model for the geographic setting.

The art is widely used in the game, not just by Γκέραλτ, but by other characters as well.

All alchemical creations are based on formulae. These recipes are generally found in the form of ειλητάρια, but some are acquired through word of mouth. Ειλητάρια can be purchased, found or acquired as rewards for services rendered.

Mixtures (φίλτρα, έλαια and βόμβες) are created by combining selected συστατικών, which include herbs, monster parts and minerals, with a medium, referred to as a base. The base determines the type of mixture to be created. Alcohol is the base for φίλτρα, grease is used for έλαια, and black powder serves as the base for making βόμβες.

Alchemical συστατικών all contain one of the six substances shown below. Just click on the icon for a more complete description of each substance:

Mixture formulae list the proportions of substances that need to be mixed rather than ingredient amounts. For instance, White Gull (

) is obtained by mixing two measures of vitriol and a measure of rebis with concentrated alcohol.

Substances are present in various συστατικών, consequently various combinations of the latter may be used as long as they contain the required substances. For example, vitriol is found in both sewant mushrooms and in ghoul blood, so either of these συστατικών may be used to create White Gull.

rubedo. A given ingredient may contain only one of these substances. If all συστατικών selected to create a potion (and only a potion) contain the same additional substance, the resulting potion will provide additional benefits. Below, is an example for ease of understanding.

There are three secondary substances to συστατικών. Listed below are what they are and what they do in φίλτρα when dominant:

Also, φίλτρα with a dominant secondary substance will not stack with "regular" φίλτρα in Γκέραλτ's inventory.

Items which can be obtained by slaying unique monsters, and occasionally, from plants. These can be used to create unique φίλτρα with powerful effects (often granting additional talents to be used to obtain skills, or granting special skills directly). 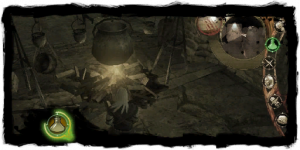 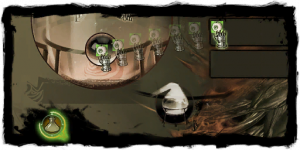 Known formulae appear on the left side of the Alchemy panel. A formula is available or "activated" when Γκέραλτ possesses all required συστατικών and a base of appropriate potency. Clicking on a formula in the list will transfer the necessary συστατικών and base to the mixing slots, but possibly not the exact συστατικών you want. Any suboptimal choice of ingredient can be replaced by dragging the preferred item and dropping it onto the one to be replaced.

Mixtures are most often created based on formulae which list substances that must be mixed with a base. Substances are found in συστατικών that include Βότανα, Ορυκτά and Μέλη Τεράτων. A given substance, for instance vitriol, might be found in several different συστατικών, meaning that φίλτρα based on vitriol can be composed in many different ways. Any formula the witcher learns (reads, hears about) is automatically added to the Alchemy section of the Journal.

Mixtures can be created without a formula by trial and error. Each such attempt results in the creation of an unknown mixture, the use of which is potentially hazardous, for unlucky mixtures can be harmful, possibly even fatal. However, if the συστατικών are matched correctly, Γκέραλτ automatically receives the formula for the mixture he has discovered.

The transformations witchers undergo as children enable their mutated bodies to use magic φίλτρα that would be deadly to an ordinary person. These φίλτρα increase witchers' fighting abilities, render them immune to venoms, enable them to see in the dark. Witchers usually drink magic decoctions in preparation for a fight, but do so less frequently in combat due to lack of time.

Witchers' φίλτρα are toxic and slowly poison Γκέραλτ, though one of his special abilities is a tolerance for toxins, represented by the green status bar (below the Αντοχή and Ζωτικότητα bars) in the game screen. Each potion consumed increases the body's level of Τοξικότητα, the yellow status bar. If this passes a certain point, Γκέραλτ becomes dizzy. If his tolerance level is exceeded, Γκέραλτ first loses consciousness, then dies.

Διαλογισμό completely rids the body of poisons. It also cancels the benefits of any recently consumed φίλτρα.

From studying the weaknesses of various monster species, the witchers gained knowledge that allowed them to develop deadly blade coatings. These coatings, referred to as έλαια, employ simple magic and are adapted to take advantage of vulnerabilities in each beast's physiology.

For example, knowing that he may face a ghoul, the witcher prepares Necrophage oil and coats his weapon with it before the battle. The oil will also be effective against other necrophages like graveirs.

Information on monsters' weaknesses, including their susceptibility to blade coatings, can be found in books that record the experiences of generations of witchers. When the witcher reads a book of this kind, the knowledge he acquires about a given beast appears in his Journal.

Note that έλαια can only be created if Talent points have been invested in the Ετοιμασία λαδιού skill.

Έλαια are created much like other mixtures, the συστατικών are mixed with a base, which in this case is grease.

Blades can be coated with έλαια from the Inventory at any time, but it does take time to do this, so the middle of a battle is not considered a "good" time.

The formulae for explosives or βόμβες were brought by merchants from faraway Zerrikania. These devices are rare. Traditional witcher training does not include any schooling in bomb use, but thanks to their basic alchemy abilities, witchers are capable of making and using explosives.

Note that βόμβες can only be created if Talent points have been invested in the Ετοιμασία βόμβας skill, which in turn requires the Ετοιμασία λαδιού skill.

Βόμβες are made much like other mixtures. Their συστατικών are mixed with a base, namely black powder.