Patch 1.3 adds the ability to store items that players may wish to save for later use, without forcing Γκέραλτ to carry them everywhere he goes. The storage interface is accessible by selecting a new dialogue option ("I'd like to access storage.") while speaking with certain characters, or by interacting directly with a nearby storage chest using

when "Store or collect items" is displayed. Items left in storage are automatically transported between chapters. Although storage is free, there is a possible bug which prevents items from being collected from storage if Γκέραλτ has no money. 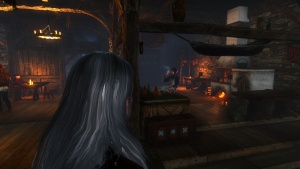 Dyson Beaver and the storage chest

Dyson Beaver and the chest in the southwest area of the lower level of the Flotsam inn, near the door to the brothel. There is a known bug if you access storage in chapter I where your items can disappear if storage was initially accessed through Dyson and not the chest directly. 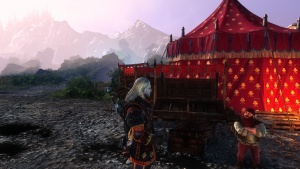 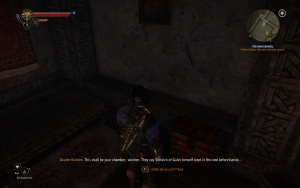 Iorveth's path: Geralt and the storage chest at the Cauldron

Raymond Gessler and the chest at the north side of the Kaedweni camp followers' encampment on Roche's path. Alternatively, Γκέραλτ can talk to the innkeeper and use the storage chest in his room at the Cauldron, if he follows Iorveth to Vergen.

Beware: On either path, Γκέραλτ will cross the mist / battlefield a second time to get to the other location as part of a quest and the second storage chest will be visible, but unusable. 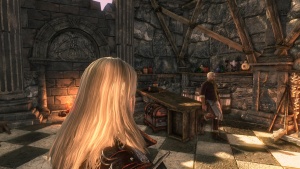 Dalum and the storage chest

Dalum and the chest under the makeshift countertop, inside the ruined building used as an inn southwest of the notice board in Loc Muinne.