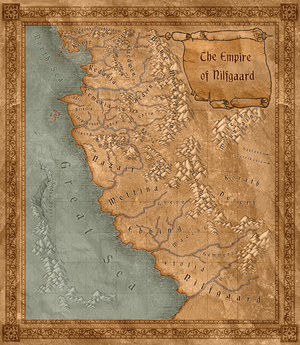 Nilfgaard is the mightiest empire in the history of the known world. It is located in the southern part of the ήπειρο and boasts both a thriving economy and a strong, well trained army with talented commanders. It has expanded mostly through the conquest of foreign countries, which were then turned into provinces of the Empire. The Empire's inhabitants believe that "real" Nilfgaardians are only those born in the heart of the Empire, and not those born in the conquered provinces.

The provinces are ruled by either stewards or kings (in the cases where the king willingly gave up his country to the Empire, he retained his throne, but was subject to the ruling Emperor). The empire has expanded throughout the years, conquering new lands and going as far to the north as the Yaruga ποτάμι during the reign of Emhyr var Emreis.

This coat of arms was created by our resident heraldry and witcher expert Mboro, based on the description in the novels.