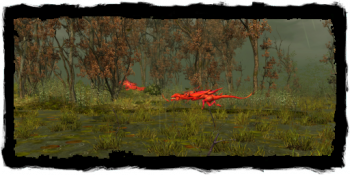 Wyvern island can be found in the north central part of the swamp forest outside Βίζιμα, between the Druids' grove and the Mage's tower, north of the Golem Cemetery. It features, not surprisingly, a healthy colony of wyverns. In Chapter II, only regular wyverns are in evidence, but in Chapter III, the royal wyverns are there, led by Moa, an ancient female.