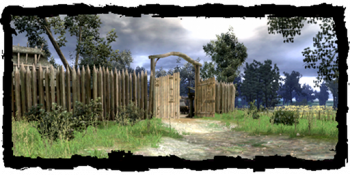 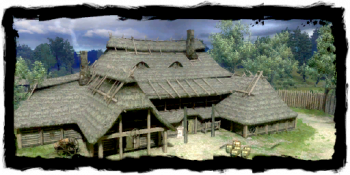 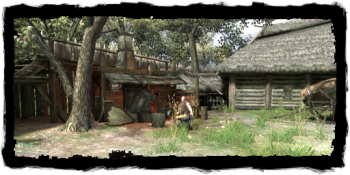 Known simply as the Inn, it is the first building Γκέραλτ finds upon reaching the Outskirts. It is surrounded by a palisade which also shelters a blacksmith, mercenaries and some stranded travellers, merchants among them.

There are two gates in the palisade. One leads to the Προάστια and the other presumably leads back towards Kaedwen, from whence Γκέραλτ arrived. The latter is locked by the mercenaries guarding it, and remains so for the duration of Κεφάλαιο I.

Alvin, Νταντέλιον, Declan Leuvaarden, Καλκσταιν, Shani and Zoltan Chivay can also be found here at various times during Κεφάλαιο I.

The inn in the Outskirts was established to cater to the needs of travelers and merchants headed for Vizima. The owner has surrounded it with a high palisade. Although the inn doesn't feature extravagant comforts, it is a safe place to spend the night and eat a meal. The innkeeper also offers a wide selection of alcohol. It is a favorite meeting place for the inhabitants of the Outskirts, so there's always someone to talk to or dice with.