Παρενέργειες (Ελληνικά: "Παρενέργειες") is a fully voiced premium module for The Witcher παιχνίδι για υπολογιστή, created by CD Projekt RED. It was released on September 16, 2008 as part of the The Witcher: Enhanced Edition.

While still enjoying the inn, the patrons, after listening to Νταντέλιον singing his first ballad, wish to hear another story.

This tale, set one year after Γκέραλτ tamed the striga the first time, starts in a rather unoriginal way — in (Vizima's) prison. The twist is that, this time, Γκέραλτ is the person visiting someone, not the one behind bars. So who is the unfortunate fellow? It is Νταντέλιον of course, Γκέραλτ's old pal, and once again he has gotten himself into trouble. Because Γκέραλτ is his friend, the task of getting the bard off the hook falls to the Μάγιστρος, once again ("... I promise Γκέραλτ, that's the last time, or almost the last time, really!").

How did Νταντέλιον land in prison? As usual, his uncontrollable lust and desires are at the heart of the matter. Unfortunately, his last victim was not a puerile peasant who could easily be brushed off. This time the bard flirted with the daughter of one of the richest and most influential men in Vizima. Not exactly a crime, you say?

When the nobleman found out what had happened, he decided to shorten Νταντέλιον a little bit, and we are not talking about a haircut. In particular, he wanted to chop off the troubadour's head. Naturally Νταντέλιον has a different opinion of what would constitute appropriate punishment. To stay out of harm's way, he has bribed a prison guard to keep him in "protective" custody. What safer place than prison?

Just when all the facts seem established and clear, it turns out that the Νταντέλιον's "one night stand" is not the real reason why he fears for his life. It seems he is in more trouble than he initially let on and now he must pay for it. So, what are the real reasons Νταντέλιον wants to stay in prison? Who is he afraid of?

It would seem that this is a certain Mr. Glover, from whom Νταντέλιον "borrowed" a large sum to pay off Ralf Duben at the prison for the "accommodations". So the first place Γκέραλτ must visit is Glover's to try to sort out the mess the troubadour has made. Luckily Glover seems amenable to repayment, whatever the source, so the witcher offers to pay off Νταντέλιονs debts and Glover agrees.

Γκέραλτ then begins scouting about town to try to find ways to raise the funds he needs. In the course of his meanderings, he meets a variety of interesting locals, many of whom provide opportunities to make a few orens. The services of witchers mercifully remain in demand and making some fast cash turns out to be fairly easy.

The major characters (other than Γκέραλτ of course) in this module are:

The rest of the characters can be found in the list of Χαρακτήρες στο Παρενέργειες. 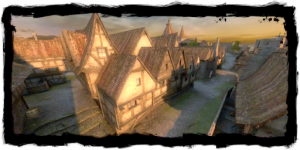 While the layout of these areas has not changed and they may seem very familiar, the locations in "Παρενέργειες" depict these places as they were sometime before the events of the main game campaign. For example, the building known as Νοσοκομείο της Αγ. Λεμπιόντα in The Witcher is known simply as the Ναός της Melitele in this module. There is no crypt in the cemetery and some parts of the sewers are inaccessible.

This list of monsters is somewhat abbreviated in this module. Most of the creatures who do appear are only worth 1 XP each to kill so the experience rewards are disproportionately small for the work required.

There are twelve quests in this module, a complete list can be found in the list Αποστολές στο Παρενέργειες.