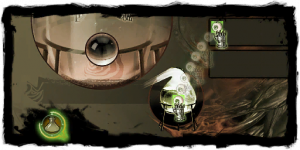 Depending on the difficulty level chosen by the player, alchemy can be extremely important to game play. Γκέραλτ can create potions that increase health or endurance regeneration, allow him to see in the dark, or provide other beneficial effects. He can create blade oils which enhance the performance of his weapons, or he can create actual weapons: bombs. The recipes for these alchemical concoctions can be learned through Ειλητάρια, or by experimentation. If Γκέραλτ experiments and creates an unknown mixture he can choose to drink it (if it is a potion!), but if the potion is a failure it will poison or blind him, possibly kill him, so saving first is highly recommended. He can also experiment with oils and bombs, but the latter could prove quite risky.

Assuming intermediate or advanced gameplay, Γκέραλτ uses potions, oils, and bombs as part of his battle preparation (for potions and oils) or during battle (in the case of bombs). But before he can use them, he either has to make them himself or find them ready-made.

It is also a lot of fun.