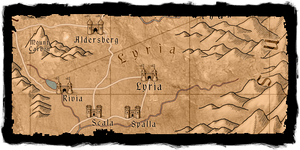 The kingdom of Λύρια και Ρίβια is one of the Βόρεια Βασίλεια, located north of the river Yaruga, ruled by queen Meve. The kingdom's neighbors are Mahakam, Aedirn and Angren.

One July, during the Second Nilfgaard War, Lyria and Rivia were invaded and conquered by Nilfgaard without any formal declaration of war. It was, however, liberated in the later phases of the war.

These coats of arms were designed by our local heraldry and Witcher expert Mboro based on the descriptions in the novels.