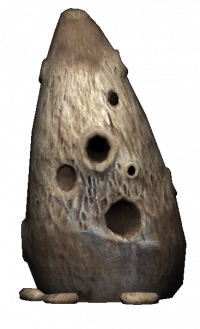 The Σύμβολο του Αρντ is a simple magical sign used by witchers. It is comprised of a telekinetic thrust that can stun, repel, knock down or disarm opponents, as well as remove barriers and other objects. 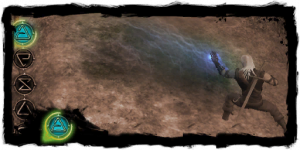 Aard is the first Sign Γκέραλτ 'learns' over the course of the game; one cannot finish the Prologue without it as it is necessary to break through a wall of debris to exit the witchers' laboratory. Its icon is based on the alchemical symbol for Air. It is the sign that the witcher uses the most. Outside of combat, Aard is most often used to clear a path, either by blowing down a wall or blowing apart a pile of debris. During combat it can stun, knockdown or disarm an opponent.

The witcher's skill with the sign is developed through the allocation of talents.

Tip: Knocked-down or stunned opponents are easy to kill with a single strike.

Later on, visiting the Circles of Elements attributed to Aard grants Γκέραλτ the Blessing of Air.

Circles of Elements dedicated to the Σύμβολο του Αρντ and bestowing the Blessing of Air include:

There are only two circles of elements in "The Price of Neutrality" and only one of them is for Aard. It has no special name. 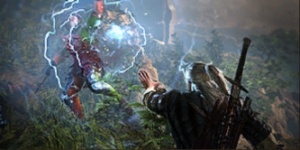 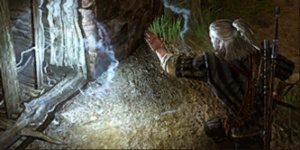 Aard is a telekinetic wave that can throw back, knock down or stun an opponent. This sign can also be used to destroy obstacles, for example crumbling walls or stacks of barrels. When an enemy is in front of a cliff, casting the sign can throw them beyond the edge. Aard has an area effect when properly enhanced.