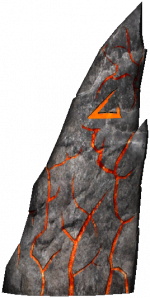 The Σύμβολο του Ιγκνι is a simple magical sign used by witchers. It is comprised of a pyrokinetic burst that can repel and ignite opponents, as well as start fires. 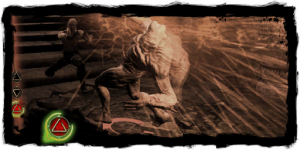 Igni is most likely the second Sign Γκέραλτ "learns" (or re-learns!) over the course of the game. It can first be acquired from the Circle of Inner Fire in the Crypt in the outskirts (see the list of Circles of Elements below for other locations. Its icon is based on the alchemical symbol for Fire. The witcher's skill with the sign is developed through the allocation of talents.

Later on, visiting the Circles of Elements attributed to Igni grants Γκέραλτ the Blessing of Fire.

Circles of Elements dedicated to the Σύμβολο του Ιγκνι include:

There are only two circles of elements in "The Price of Neutrality" and only one of them is for Igni. It has no special name. 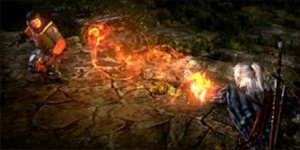 Igni - in its basic form - releases a gush of flames that wounds opponents with fire. It can also be used to detonate flammable gases emitted by the Dragon's Dream bomb and dead rotfiends.

and select Igni; then press

key to cast it.

Upgrading the Σύμβολο του Ιγκνι with "Enhanced Σύμβολο του Ιγκνι" (in the Magic tree) will increase its damage output, its effective range, grants a chance to set enemies on fire with Incineration, and grants it area of effect damage.