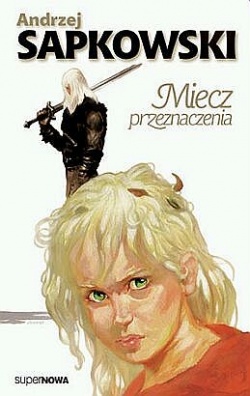 While on his way to Brokilon to deliver a message to the queen of the dryads, Eithné, from King Venzlav of Brugge, Γκέραλτ stumbles upon the body of a boy, probably no more than fifteen. The boy has been killed by an obviously expertly delivered arrow which can still be seen protruding from his skull.

Experience quickly makes it clear to the Μάγιστρος what has happened: the boy had obviously strayed into territory claimed by the dryads. Like others who had suffered similar fates before, the scenario had likely been the same.

Warning shot. Human! Not one step further!
The boy, probably panicked, ran the wrong way, further into the dryad's domain
Another shot. This second shot, not a warning

A sad tale, too often repeated.

He hurries his pace, hoping to catch up with the people he has been following and convince them to turn back. Too late. He finds a second body, an adult male, and then a third. Then he hears a rustling noise. Locating its source, he discovers, much to his surprise, Freixenet. Freixenet is in bad shape, but his only concern seems to be that Γκέραλτ find "the princess".

As he tries to extract the large man from his hiding place, another arrow whizzes by narrowly missing the Μάγιστρος's own head, then more. They are surrounded by dryads. Γκέραλτ realizes he has no choice but to surrender if there is any hope of surviving the encounter. He explains the original purpose of his unannounced arrival in Brokilon and manages to convince them that he must still speak with Eithné. They agree to escort him the rest of the way, and assign one of their ranks, Braenn to be his guide. He is immediately sent on his way and not permitted to speak with Freixenet again nor told what will happen to the man.

Γκέραλτ and Braenn then set off through the forest, on their way to Duén Canell. Along the way they come upon a giant centipede which seems to be threatening a halfling. Springing into action, the Μάγιστρος tackles the beast. With the help of Braenn, they eventually dispatch the monster, only to realize that its intended victim was no halfling, but a little human girl, no more than 10 years old, the princess Cirilla of Cintra herself.

Realizing they cannot leave her there alone, the Μάγιστρος and the dryad decide to take her with them. It is during this latter part of their journey that Γκέραλτ and Ciri get to know each other a little. It seems that Ciri had been sent to meet a prospective suitor, prince Kistrin, son of king Ervyll of Verden, by her grandmother, Calanthe. Ciri, however, had other ideas and ran away. Freixenet and his unfortunate party had been trying to find her to bring her back when they were ambushed by dryads.

Finally the trio arrive at the heart of Brokilon, Duén Canell, where they also find Freixenet. Although still a prisoner, his wounds are being treated by the dryads and he already seems a good deal better. The two men finally get a chance to speak and Freixenet fills Γκέραλτ in on the rest of the details of Ciri's adventure so far.

During the journey it has become increasingly clear that, this being Brokilon, Ciri will likely never be permitted to leave. So now, in addition to his original message, Γκέραλτ must now speak with Eithné about Ciri's fate as well. The queen of the dryads is proud and determined, not to mention particularly unsympathetic towards the humans who have relegated her people to one tiny patch of forest.

Ultimately, Eithné allows Ciri to choose her own fate and Ciri chooses the Μάγιστρος. The queen also decides to spare Freixenet on the basis that he is an acquaintance of Γκέραλτ and that he did not have the intention of hunting dryads when he trespassed into the forest. After all, dryads still need males to make new dryads, so it seems that the large man will become a stud.

Back on his original route to Brugge, the Μάγιστρος and his newest companion are surrounded by what seem to be a group of Verden soldiers. One of the group explains that what they have come upon is the scene of a dryad ambush of a merchant caravan. But Γκέραλτ quickly notices that the evidence around him does not support the claims being made by the "soldiers" and a fight ensues. Ciri manages to hide in a tree but the Μάγιστρος is hopelessly outnumbered. Luckily, and at the last minute, he is saved by the arrival of Mousesack and some dryads.

The new party of three then continue on the road together as Γκέραλτ and Mousesack catch up with each other's news. The Μάγιστρος then leaves Ciri in the care of her "uncle" Mousesack and continues on his way, much to the chagrin of the young girl.