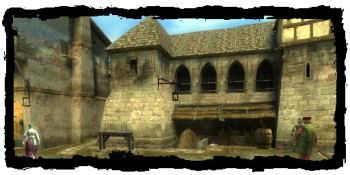 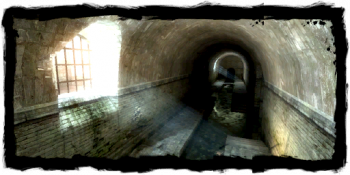 The sewers under Βίζιμα are quite extensive and hold many surprises for the unwary or unprepared. They are infested with drowners and drowned dead, not to mention ghouls and a zeugl. They also hold their fair share of loot in the various chests, sacks and corpses found in the main sewers, not to mention what can be found in the Cult of the Lionhead Spider's lair and the crypt.

The sewers can be accessed from a few different places and in a couple of different ways. There are the main entrances: one from the Συνοικία του Ναού and one from the Trade Quarter. There is also a floor grate in the jail which leads to the sewers, and finally, beginning in Chapter III, one can now use a grate near the steps leading into the slums or directly teleport into the elven ruins.

You can travel between the Temple and Trade quarters by way of the network of sewers, but it is a dirty, smelly, monster-infested route — unless you like that sort of thing. It also hides a fisstech production laboratory which is run by the local drug lord, Gellert Bleinheim.

"The sewers beneath Vizima were built in the age when an ancient elven city stood on this site. Not much of their original greatness remains, but they still serve their function well. Connecting the Συνοικία του Ναού and the Trade Quarter, they carry off sewage from the entire city, rendering the stench of the gutters a little less overbearing. The sewers have recently become infested with monsters, especially drowners. Apparently, a cockatrice has also made its lair there.

Secluded and rarely visited, the sewers have become an ideal refuge for the worshippers of the forbidden Cult of the Lionhead Spider.

I found a way to reach the Salamandra hideout in the city sewers." 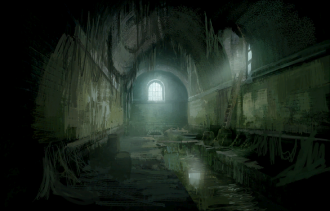 In "Παρενέργειες", not all sections of the sewers are available.