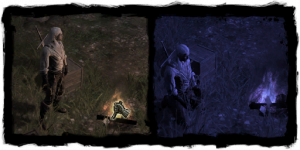 Campfires and fireplaces are found scattered about the landscape in The Witcher. They provide convenient and free places for Γκέραλτ to rest and also indulge in a little Αλχημεία. Most of these look the same, but some are a bit different. For example, some areas look more like roasting pits but still can be used the same way. Of course the reverse is also true, especially with fireplaces, most fireplaces are not "usable", but some are. Holding down the Alt-key will reveal any usable fire sources, along with anything else that is "click-able" in the area.

Fires that are already lit: When Γκέραλτ first enters an area, you will notice that all available campfires are lit. This is very handy in finding them (as are the maps). On subsequent visits, these fire sources are not generally lit.