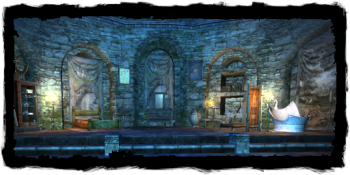 Agnes της Glanville's lair, one of three ancient crypts, is a required destination in the game only if Γκέραλτ choses the Witcher / neutral path. The crypt remains accessible for other path choices, but is not required to complete any quests. It can be explored purely for the sake of interest, XP and loot.

The lair hidden in the depths of the southernmost refugee cave, in the chamber where Zdenek resides. There, Γκέραλτ is met by alghouls, fleders, cemetaurs and up to four Basilisks on the way to his goal: a magical formula, which is found in Agnes of Glanville's trunk, along with some nice expensive Ορυκτά and a moon rune. There are also sewants and green mold.

Interestingly enough, even though the hidden lair is supposedly abandoned (and monsters settled there), the interior looks intact and gives the impression that it's still actively used by someone (Agnes?) and they just left the area. One can notice new candles burning, freshly prepared bathtub, healthy plants in the garden and so on. It possibly suggests that some magic is present in the place which preserves it.