Blue Eyes is an optional quest in Chapter III in which a knight asks Γκέραλτ to find his missing sister, Blue Eyes.

As Γκέραλτ walks into The New Narakort one sunny day, he notices a knight of the Order, Patrick de Weyze, sitting at a table near the door and decides to get some news of Siegfried. After getting a quick update, the conversation turns to matters more important to the knight. His sister, the blue-eyed lass is missing. It seems that she was found unconscious with blood trickling from her neck one morning not too long ago. Since then she has disappeared entirely and her brother is concerned that she is in the thrall of a vampire.

The witcher agrees to take to job and begins keeping an eye out for any information on the whereabouts of the blue-eyed lass. Eventually he decides to have a look around the local brothel, perhaps get in a little R and R and who knows, get some new inspiration on his various quests. He goes inside and, lo and behold, there is a beautiful young woman who matches de Weyze's description perfectly, but she is working there. Hmmm...

Our hero decides to chat her up, maybe check out her line of services. They begin to converse and things are going swimmingly so he decides to take things further and proposes a date (sleep with her). They negotiate and a deal is struck, provided the witcher has the courtesy of bathing first, not necessarily alone, mind you. (I guess trudging through swamps and crypts is smelly work!)

After the date, Γκέραλτ remarks about her neck wound, saying it adds character but this does not elicit any further information from Blue Eyes. One thing she does make clear is that she is happy where she is and has no desire to be elsewhere. So the witcher decides to go back and let Patrick know what he has found.

De Weyze is not amused by the assumption that his sister is a prostitute and blusters that she would never lower herself to such a degrading lifestyle, but the witcher points out that she does match the description in every detail, right down to the scar on her neck, so the knight must concede that it is indeed his sister who is turning tricks at the brothel. He does qualify this with the assertion that this proves beyond a shadow of a doubt that a vampire within the brothel must be controlling her. What else could explain such uncharacteristic behaviour? He insists that Γκέραλτ go back and find the vampire. Γκέραλτ agrees to have another look.

The witcher heads back to the brothel, but he knows that there is nothing of interest on the first floor. Been there, done that, so the second floor must be where to look next. Getting there is not so easy, though. His path is immediately blocked by a large man who makes it quite clear that no vagabond in leather rags is swanning upstairs to see the Queen of the Night without a specific invitation and no such invitation is in evidence. 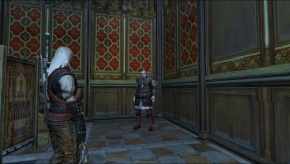 If Γκέραλτ has the House of the Night signet ring: he shows it to the bouncer and this is sufficient to make him back off, reluctantly and let the witcher pass, or
If he does not have the ring: he can either bribe the Bodyguard with 250

, some fisstech or dispense with niceties and simply fight him.

Once upstairs, he meets the Queen of the Night, accompanied by several Sisters of the Night. She is a bit miffed that the witcher has just barged in and makes it clear that this is not the sort of behaviour she usually tolerates. She says that the witcher she knew would never act this way. Γκέραλτ is contrite and apologises citing his amnesia as a partial excuse and asks how he knows her. She points out that she knew him, he never knew her. She knew him to be a close friend of her ex-lover, Regis (the vampire that Νταντέλιον spoke of during Shani's party), who died fighting at the witcher's side.

The vampiress and the witcher continue their conversation and the topic naturally shifts to the blue-eyed lass downstairs. She explains that the girl is there of her own free will. Blue Eyes summoned the Queen herself and wants nothing more than to become a vampire and live forever, remaining young and beautiful. She absolutely does not want to marry some old codger and live a life of drudgery which is what awaits her if she returns to her brother.

So Γκέραλτ must make another hard decision: believe that the blue-eyed lass is there on her own will (and get to participate in a foursome with the vampires as they show their appreciation), or resist (and kill the vampires). 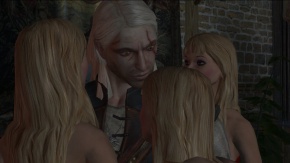 Γκέραλτ and a trio of lovelies

Side with the vampiresses: If Γκέραλτ chooses the sexual encounter, Patrick de Weyze shows up, thankfully after the sex. He accuses the witcher of collusion with the vampires and demands they settle things then and there, menacing that this will be Γκέραλτ's demise. Not so says our hero and the swordplay begins, with a little help from a bruxa and some alps.

After our hero has dispatched the knight and his squires, he stops to speak with the blue-eyed lass. She is grateful for his help but a bit disgusted by the brutality she has just witnessed, and so ends the quest. (5000 XP, 200

) (Warning: One of Patrick's squire's will attack the blue-eyed woman, who is standing on the stairs if he gets too close. Do not let her die.) or

Side with the Patrick (and kill the vampiresses): If Γκέραλτ chooses to kill the Queen of the Night and her courtesans, he does just that, though he may choose to do so either before or after having sex with the vampires.

Before sex: He kills the Queen of the Night and the Sisters of the Night who join the fight. He then goes downstairs to speak to the blue-eyed lass. She can not believe what the witcher has done saying that the Queen of the Night had only ever spoken highly of him (ouch!). She then decides that some good could still come of the situation, at least for her, and begs Γκέραλτ kill her brother.

The witcher (naturally) asserts that he does not kill humans (oh, really?) which infuriates her, prompting her to say that she hopes "his sword" drops off. Our hero then leaves and goes back to The New Narakort and informs Patrick de Weyze of his findings. De Weyze is also furious because Blue Eyes is not with the witcher and refuses to pay the agreed sum. (2000 XP)

After sex: Patrick de Weyze drops in after Γκέραλτ had sex with the vampires and Γκέραλτ can choose to side with him to kill them after some verbal skirmishing. However, he is less than pleased that Γκέραλτ initially sided with the vampires but nevertheless rewards him for seeing the light. (2000 XP)

Remain neutral: If Γκέραλτ sleeps with the vampires and decides to not take sides when discovered by Patrick de Weyze, a free for all ensues. (3500 XP)

You can pay for "companionship" with the blue-eyed lass at a reduced price if you show her the House of the Night signet ring. Or you can give her either a sapphire or gold sapphire ring as a gift. Or you can both show the ring and then give the gift; this will pay for everything.

I spoke with Patrick de Weyze, the knight at the New Narakort. He says a vampire bit his sister, and she then ran away from home to protect her family. I promised to notify him if I find the girl. Apparently she has incredible blue eyes. I promised to find the blue-eyed girl who was bitten by a vampire. I should look around town.

Carmen admitted that the girls from the brothel in the Trade Quarter bear vampire bites. Maybe I should look there? I should look for Blue Eyes at the city brothel.

I saw a blue-eyed girl at the brothel. Could this be the knight's sister? I should ask the knight if the girl from the brothel is his sister.

Patrick de Weyze suggested that his sister is in the brothel only because a vampire controls her. Control of that kind is only possible over short distances, so the vampire must be in the brothel. I must find out if somebody from the brothel is controlling the girl's mind. (1500 XP)