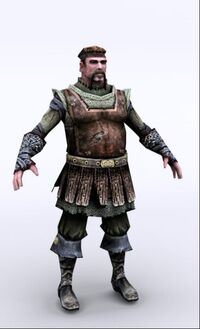 Boholt is the oldest member and also the leader of the Crinfrid Reavers, a group of mercenaries hired by King Niedamir to take part in the hunt for a dragon outside Hołopole in "Τα Όρια των Πιθανοτήτων" ("Granica możliwości"), a short story in the Το Ξίφος του Πεπρωμένου (Miecz przeznaczenia) collection by Andrzej Sapkowski. The rest of the group includes:

The Crinfrid Reavers appear in the episode "Smok" of the The Hexer, where Boholt was portrayed by Marian Glinka.

Early concept art from the game suggests that Boholt was considered as a character, but obviously did not make the final cut.

Boholt does not appear in The Witcher 2, only his compatriots Kennet and Desbrut do, but they tell a sad tale of what became of their leader after the dragon hunt. They say he lost his memory after taking a spill and hitting his head on a rock and while he "can still be a beast in battle", he does nought much else, having even lost his interest in women.