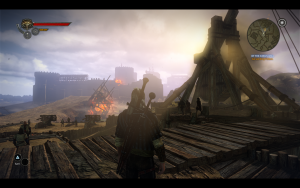 The Camp of Foltest's army is where players get their first opportunity to look around as Γκέραλτ in The Witcher 2 as we find the witcher and Triss just waking up in their tent. Just as the two are waking up and starting their day, a messenger arrives summoning the witcher to an audience with King Foltest who is in the upper camp, near the siege tower.

Just outside Triss' tent are some herb bushes. A few steps to the south, Γκέραλτ meets some old acquaintances, the Crinfrid Reavers. By talking to them he can begin the first secondary quest of the game, "Melitele's Heart", which will find an end only in Κεφάλαιο I. There is a Circle of Power just a few meters away from them.

A bit further on, Γκέραλτ can enter the soldiers' area which is surrounded by a wooden palisade. Inside, are some practice dummies and a bit farther in, he get his first introduction to Μπρα ντε φερ from "Strongarm" and also a taste of dice poker from another soldier before continuing on to meet King Foltest.

The area serves more as a tutorial for the game interface, allowing Γκέραλτ to speak to characters, loot containers, gather herbs and plants and use the Circle of Power. 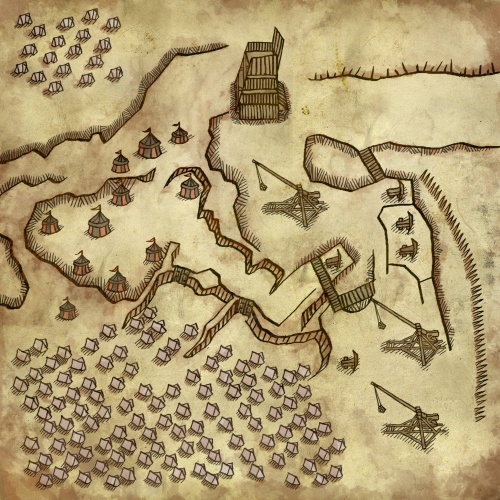