The crypt of mages is a crypt in Loc Muinne underneath the tower in the main square. It has three levels extending under ground and plays an important part in The Secrets of Loc Muinne.

Its levels are accessed via a central spiral staircase. The third level is not accessible until you defeat the Vran Guard: the staircase meets a dead end before reaching the third level door, this wall disappears once you have access.

This room contains wraiths, bruxa and four Resonating Crystals. Kill the wraiths and bruxa but be careful not to hit the crystals with your swords during the fight as they will damage you!

Once all crystals have been activated the door to the next room opens. 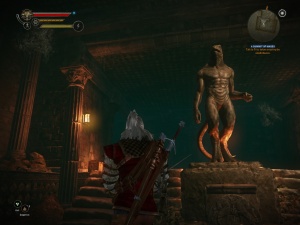 A statue of a Vran?

This room contains a statue of a bipedal lizard (possibly a Vran) in the center, at the base of it is a Forgotten vran sword.

Picking up the sword causes a Vran Guard (simply labelled "Guard") to appear and attack you. It looks like and fights in much the same way as The Operator except that it summons groups of wraiths instead of two gargoyles when invincible. It also does not summon wraiths every time it becomes invincible giving you more opportunities to attack it.

Once it's defeated, you can move on to the next room.

This room contains wraiths and bruxa. There are also several coffins containing loot including 250

You can exit this room revelling the true bottom of the spiral staircase which has piles of loot stacked at the bottom.

Once you accept the mission from the two scholars in the market square you meet them in the second level of the tower. There Cynthia, Adelbert and the two scolars have dug a tunnel through the crypts to the sewers underneath the Redanian encampment to access Dearhenna's laboratory.