Known also as the Valley of Flowers, Dol Blathanna is neighbour to Aedirn and Kaedwen. It belonged to the elves for ages, until humans came and laid claim to the land, and the elves fled to the mountains. The region was led by Filavandrel aén Fidháil, but the elves struggled to survive as they had no knowledge of agriculture; among them was Toruviel.

After Nilfgaard invaded the Βόρεια Βασίλεια, Emperor Emhyr var Emreis gave Dol Blathanna to the elves who had helped him and his empire. He also made Enid an Gleanna the queen of the elves' new state, though she still consulted with Filavandrel. After the Peace of Cintra, Enid an Gleanna was forced to swear fealty to Demawend and Aedirn, reorganizing it into an autonomous duchy.

The coat of arms for Dol Blathanna is never actually described in the books. This particular coat of arms was designed by our resident heraldry and Witcher expert Mboro.

The flag for Dol Blathanna is never actually described in the books. This particular flag was designed by administrator of official polish Wiki SMiki55.

Dol Blathanna is also the setting for the seventh episode of the TV series, "Dolina Kwiatów" (Valley of Flowers). 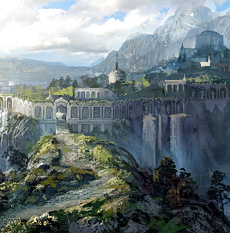 Dol Blathanna is a mentioned location in The Witcher 2: Assassins of Kings. Iorveth claims that his people have no future there, despite being home for over 2000 elves for the last 5 years since its formation into an elven state. Only a little over a dozen elven children have been born so far in it, because most of its inhabitants are old and sterile, and Francesca Findabair is forced to abide by the Nilfgaardian emperor's rules, which ordered her to sacrifice the Scoia'tael to their execution at the hands of the other Northern monarchs. This is the main reason behind Iorveth's support for Saskia, the Virgin of Aedirn. He believes that the Pontar Valley might be the first suitable place for elves to flourish and not be persecuted.

A book available for purchase entitled "The Valley of the Flowers" provides this glossary entry in Γκέραλτ's journal.

Strangely enough, the game constantly refers to Dol Blathanna as an independent kingdom rather than an autonomous duchy in Aedirn. It is also incorrectly located on the map.

In the elven tongue Dol Blathanna means the Valley of the Flowers. Anyone who sees this land with their own eyes would admit to the aptness of this poetic name. Once the southeasternmost province of the Kingdom of Aedirn, it became the sole and sovereign realm of the Free Elves following the last war against Nilfgaard, when Emperor Emhyr var Emreis gave the elves these lands in return for their wartime service. Dol Blathanna is ruled by the elven sorceress Francesca Findabair, known also as Enid an Gleanna, the Daisy of the Valley. It remains a thorn in the side of neighboring realms, even though its queen has been forced to distance herself officially from the guerrilla war waged by the Scoia'tael.