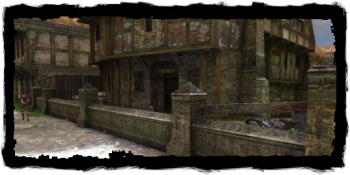 Not to be confused with his place of business, this is Malcolm Stein's, or the dwarven blacksmith's house. It is located in "Little Mahakam", the non-human district of the Temple Quarter. It faces both Καλκσταιν's and Golan Vivaldi's houses, but is separated from them by a low wall. The only access is from an alley off Peddler Street, just north of Νοσοκομείο της Αγ. Λεμπιόντα. It also happens to be the single richest source of wolf's aloe in the entire game. The potted wolf's aloe there grows eight leaves at a time.

This is where the Μισο-ξωτικό that was being held by the thugs in the slums during the A Ghost Story quest is staying and where she asks Γκέραλτ to meet her to claim his reward.