Γκέραλτ receives Echoes of Yesterday from Yaevinn at the beginning of Chapter III, if the witcher happens to be in the Druids' grove in the swamp. The elf asks Γκέραλτ to locate his men who appear to have gone missing in the sewers of the Trade Quarter. 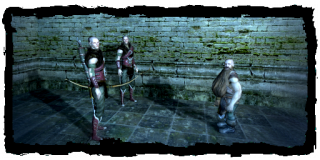 Find Yaevinn in the swamp and get the quest, then proceed to the Trade Quarter (Triss' house) using the teleporter in the Mage's tower. From there, head to the sewers.

After killing the ten or so drowners en route, you will find a dwarf named Ren Grouver and two elves standing around having a conversation about a skirmish. Talk to Ren. He will tell you about their most recent encounter with a monster in the elven ruins and ask you to get rid it. The beast is not only blocking his path and but has killed some of his compatriots. He describes one of the unfortunate as having simply "exploded".

Take the mission and proceed into the ruins through the tunnel which can be seen through a large opening in the sewer wall. When you arrive at your final destination, you should see a cut scene featuring a succubus-like creature. Enter the room and kill it — it is a bruxa (vampire).

When you are done, Ren will enter the hall and thank you for your help. At this point Γκέραλτ mentions that the fight was "worth more than [Ren could possibly] know", which is strange as the actual battle is a breeze, but I digress. Next, Yaevinn arrives via the Elven Ruins teleporter, thanks you, tells you to forget what you have just seen here and gives you your reward. That is it, all done. 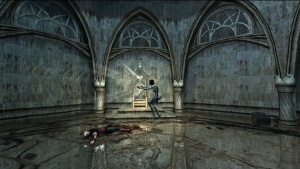 the bruxa causing all the trouble