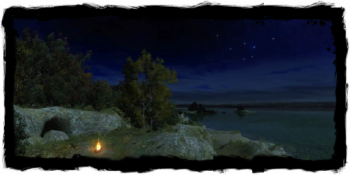 One of several caves in the game, the elven cave 's smooth walls and floor suggest that the elves currently living there are not its first inhabitants nor probably its last. The current residents are the remains of a sick and wounded Scoia'tael commando unit. The leader of the unit is Toruviel. She has previously met Γκέραλτ (and Νταντέλιον) in Dol Blathanna, though his amnesia prevents him from remembering the encounter.