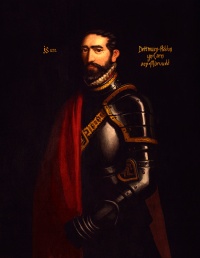 Emhyr var Emreis, Deithwen Addan yn Carn aep Morvudd (In the Αρχαία Διάλεκτο - the White Flame Dancing on the Barrows of his Enemies), is the current Emperor of Nilfgaard in the novels, tv series, movie and the games. He publicly is favourable to the Elder Race, in stark contrast to the Northern Monarchs.

His rule of Nilfgaard is highly aggressive, similar to his predeccesors; with large expansionist policies. This led to the two wars against the North described in the novels. Emhyr var Emreis is an intelligent and brilliant ruler. He picked his people well and crushed all plots against him. He was ruthless toward traitors and moved towards his goals with determination.

If you are averse to spoilers and have not read all the books, do not read further! Click here for the true identity of Emhyr var Emreis.

When entering Flotsam, Vernon Roche gives his name as "Emhyr var Emreis", a spice merchant during the quest "A Rough Landing". Which the guard off-handedly dismisses, rather comically, as a lie; saying: "A spice merchant? Not likely."

Later, the emperor is revealed as the Letho's patron, having supported and funded the regicides as a precursor to his plans to destabilise then invade the Βόρεια Βασίλεια. As an incentive, he had promised Letho a land where Witchers could be free to live without the hatred and prejudice they typically experience.

It has been revealed that Charles Dance will be the voice of the Emperor in the upcoming final chapter of the game trilogy.