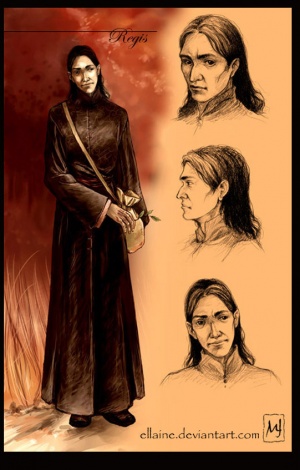 Emiel Regis Rohellec Terzieff-Godefroy, or simply Regis, was a very powerful higher vampire, and more than four hundred years old when he first met Γκέραλτ of Ρίβια. He was the barber-surgeon of Dillingen but surprisingly intellectual for one in such a profession. There was always the fragrant scent of roots and herbs emanating from him. His appearance was that of an ordinary middle-aged man, with an impressively crooked nose, greying hair and black, shining eyes. His smiles always concealed his sharp teeth, except for a couple of times.

He also chose to ride a mule, which he named Draakul, instead of a horse.

Γκέραλτ and his travelling companions first met the vampire in the necropolis of Fen Carn, although they did not initially realize his true nature. After inviting the group to spend the night at his nearby cabin, he decided to join Γκέραλτ and his companions on their journey. Even Γκέραλτ's medallion did not give the vampire away, and it was only some time later that they realized that Regis was indeed a vampire. Although the companions had their initial doubts about him, Regis became a good and trusted friend.

He was particularly fond of tearing down the myths and legends about killing vampires with garlic or wooden stakes. During one feast at Anna Henrietta's castle he related a story in which the exact opposite transpired. During their journey Regis reveals to the rest of his companions that when he was younger he had been very cruel and stupid. For some time he had stopped "drinking" and become involved with a vampiress, but she left him, however, when the "addiction" took hold again, even more strongly.

The vampire began "flying drunk" which was considered to be completely unacceptable in his community. On one occasion while "drunk" on too much blood, he was captured by peasants who cut off his head, pierced his heart with wooden stakes, doused him in holy water and buried him. The regeneration took Regis about fifty years, leaving him with quite some time to reflect on his lifestyle, but he did regenerate completely. After that he changed his way of life and stopped drinking blood completely.

Emiel Regis had a romantic relationship with a succubus while the witcher and his companions were in Beauclair.

He died, ripped apart and melted into glass by Vilgefortz, during the assault on Stygga castle.

During Shani's party in Chapter II, Νταντέλιον mentions that Γκέραλτ once had a vampire friend, Regis. To which Γκέραλτ derisively replies: "...and a dragon friend, too?" which is quite funny because in the short story "Granica możliwości" (Τα Όρια των Πιθανοτήτων), he did indeed make friends with a dragon. Zoltan also recounts that Regis could pull red-hot horseshoes directly from a fire with his bare hands. In Chapter III, the Queen of the Night mentions him as her past lover.