From a Bygone Era

From a Bygone Era is a secondary quest of The Witcher 2: Assassins of Kings. The events start in Κεφάλαιο I‎I and continue to Κεφάλαιο I‎II.

While investigating on behalf of Mavrick for the Little Sisters quest, Geralt comes across Malget's house. After looking around the empty hut, he goes around back and finds a small clearing with four graves and examines them taking note of the markings on each. He then returns to the hut where he notices a pile of barrels on top of what seems to be a trap door. The witcher then casts Aard (using the

) to clear the barrels and gain access to the trap door which leads to a cellar under the hut.

In the cellar, he finds three strange looking altars with candles on top of each one. Each altar seems to have a fetish on the front which resembles the markings on the graves outside. Geralt decides to try lighting the candles, but each time he does, a wraith appears, until he discovers that the correct order is the one shown on the carvings on Malget's own grave. When he lights the candles in that order, a previously concealed door to a secret room opens.

In the secret room, the witcher finds Malget's notes on the desk. He can then choose either to sell the notes to Dethmold or to keep them for later use. If he keeps them, the quest continues in Κεφάλαιο I‎II.

Important: If he takes the notes to a sorcerer (e.g. Dethmold) before completing the "Little Sisters" quest, this results in a bug with that quest.

At the point in Where is Triss Merigold? quest after Geralt has learned of Síle's plans and spoken with Philippa about them, Philippa advises him to cross the mist over to the Kaedweni side to continue his search. While on that side, Geralt can make a side trip to Malget's house and do the same things as described on Roche's path to get Malget's notes.

Xbox 360: There is a bug in the 360 EE where the trap door is locked will not open on Iorveth's path. No known fixes.

If Geralt did not sell the notes in Κεφάλαιο I‎I, Bras της Ban Ard can decipher them for him, thus giving him the password he will need later. As Bras explains:

You needn't even know the meaning of the words for the sentry to let you pass. You must merely know the sequence in which the password must be read. In this case we have a sentence: "Nanna Kanpa Zi Uddu-ya Ia Ia Gat Exa Nanna Zi Uddu-Zi Gat Kanpa Nibbit." "Nanna Kanpa" means "forge ahead." While "Nanna Zi" means "backtrack." In summary, should you encounter a sentry who reacts to this scroll, you must first answer with the words that follow "Nanna Kanpa," in their given sequence, then omit "Nanna Zi," and conclude with all the words that follow this phrase, but in reverse order.

After finding the entrance to the sewers, located near The Mighty Numa, the witcher decides to check things out below Loc Muinne. There he finds a strange glowing door with a face, the guardian. When he approaches the door, the guardian utters what seems to be a question: "Nigb't?" Luckily, Bras' advice comes in handy and Geralt replies with:

This opens a portal through which Geralt enters and finds a room with 6 braziers in wall recesses and a brazier in the center, and at the far end, a locked door.

The witcher quickly notices that lighting or extinguishing one brazier alters two other braziers. After a few trails, he manages to light all 7 braziers and hears a loud "click" as the door is unlocked (see below for actual ordering required to open the door). This leads to a staircase and a second chamber where Geralt meets a strange being, The Operator. 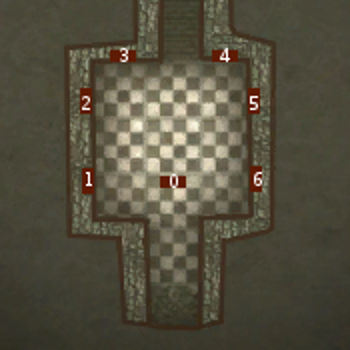 To get through that door, you must move around the room and light all the braziers except the central one. Be careful as lighting/extinguishing some will light/blow out others. The braziers are numbered 0 through 6, with brazier 0 being the one in the center of the room and moving clockwise from there:

How to unlock the door : The braziers have spikes located above them. Each brazier has a different number of spikes ranging from 1-7. Activating braziers 1 and 5 will open the door. (The numbers being the amount of spikes above the Brazier.)

Once in next room you will talk to The Operator. There are several possible outcomes:

Note: Fighting The Operator could be difficult since he constantly shoots off fireballs & calls his pets once damaged enough (I fought him with +28 armor and couldn't kill his pet gargoyles quickly enough).

The operator will constantly throw fireball at the player, it is easy to apply some quick damage while avoiding the projectiles by quick attack. Once the operator loses a part of the health, he will sheild himself and the shield will knock the player into the ground when in range, and deflect all melee attacks - only by killing the minion gargoyles can one disable the shield barrier. The process will repeat for several times. Note though that if you hide behind the poles at the back of the room and wait after killing the gargoyles and before attacking the operator, the game will go out of combat and you can save and heal (the operator will make taunting animations, but will not attack as long as you keep the pole between him and yourself). Quick ways to deal with minions:

Geralt found some strange notes in Malget's hut - he immediately sensed magic in them. After a moment's thought, the witcher decided to take the notes to someone specializing in sorcery.

If Geralt shows the notes to Dethmold:

And he had done well, for it turned out that these were necromantic formulae useful in making pacts with evil spirits. Though possessing such documents warranted death, Geralt did not wish to part with them.

Bras της Ban Ard, a learned sorcerer whom our hero met in Loc Muinne, told Geralt an interesting story about Vrans. The members of this extinct, intelligent, reptilian race loved, warred and gathered treasure. The Vrans were adept at securing their riches. They placed magical guardians near their hoards and these would activate should someone, carrying a token inscribed with the words of Power necessary to open the passage, came nearby. The guardians would allow into the treasuries only those who knew the password. Geralt kept Bras' advice in mind and, since it was likely that the document he found in the haunted house by the Pontar contained a Vran password, he decided to search Loc Muinne for a spot at which it might be useful.

As he wandered Loc Muinne's sewers, Geralt chanced upon a strange creature resembling a will-o'-the-wisp. The being asked him a question in an incomprehensible dialect. A cat got Geralt's tongue, but fortunately, the notes taken from Malget's house started to glow faintly at that moment. The Witcher began to suspect the meeting was not accidental and that it might result in interesting things. Then our hero remembered Bras της Ban Ard's tale of Vran guardians, so he began looking through the manuscript from the haunted house in search for answers.

Geralt read the password from Malget's notes correctly. The Vran guardian opened a magical portal and then disappeared.

But the riddles had hardly ended. The witcher passed through the portal and emerged in a locked room. The seven braziers that stood within had to be used to open the door. It is, therefore, not unreasonable to assume that the Vrans became extinct because they found it hard to exit their home.

Geralt managed to light all the braziers. With the door unlocked, he could proceed.

If Geralt pretends to be a "Chosen One":

Geralt's patience was rewarded. Beyond the open door, another guardian awaited him - a mysterious being brought to life by the Vrans. Geralt heard of the guardian out and did not hesitate for an instant. He announced that he was indeed the Chosen One the guardian had been awaiting, and then allowed the creature to use the artifact that was the key to the prize.

Having made use of the artifact, it is safe to contend the experience changed Geralt thoroughly. Ready like never before, he set off to complete the task that had brought him to Loc Muinne.

If Geralt refuses the artifact:

Geralt's patience was rewarded. Beyond the open door, another guardian awaited him - a mysterious being brought to life by the Vrans. This guardian was tasked with rewarding those who were brave enough to find him and proved worthy of the prize. The witcher, however, unsure of what to expect, hesitated for a heartbeat and squandered his chance to solve the riddle. Chided for indecisiveness, he was promptly ejected from the chamber back into the sewers. The portal had closed for him forever, and the Vran secrets would now await another explorer.

Geralt killed the assailant and never learned what the Vran guardian had to offer. The adventure over, the witcher could return to the sewers through the open portal and continue with the task that had brought him to Loc Muinne.

If Geralt is honest and admits he is not a "Chosen One":

Geralt's patience was rewarded. Beyond the open door, another guardian awaited him - a mysterious being brought to life by the Vrans. The witcher was both wary of a trap and unwilling to surrender control to the strange creature. The guardian concluded that he faced an intruder, while intruders faced the penalty of death. The creature attacked the witcher, thus proving not to be a repository of ancient wisdom, since attacking a witcher is never a wise idea...

Geralt killed the assailant and never learned what the Vran guardian had to offer. The adventure over, the witcher could return to the sewers through the open portal and continue with the task that had brought him to Loc Muinne.