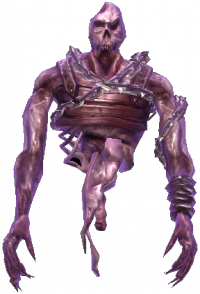 Gambling Ghost is what remains of a man obsessed with dice. He would not let such a small thing like death keep him from his passion. This is (was?) no mere hobby. Quite possibly the writer of the Diary of a Dice Collector. He can be found at the fairytale ruins outside the village of Θολά Νερά in Chapter IV (see Notes below).

When the witcher first meets the ghost, the latter exclaims "Γκέραλτ της Ρίβια himself... you're renowned in the ghost world." It seems our hero's reputation knows no bounds.

If Γκέραλτ chose Triss to be Alvin's guardian in Chapter III, then he has to rescue Alvin from the Gambling Ghost, either through a fight or by beating him at a game of dice. If he does not kill the wraith to save Alvin, he has the choice to either let him live and keep him as a poker opponent, or send him to the great beyond.