The griggs are tiny humanoids which Γκέραλτ encounters in Θολά Νερά as part of the Small Problems quest. There appear to be at least two tribes of griggs: the so-called "good" tribe and and a "bad" tribe. The good tribe inhabits the area between the currently ruined bridge to the fields and the riverbank, while the "bad" tribe has taken up residence in one of the deeper chambers of the crypt in the fields.

Even the good tribe seems to have a rather mischievous streak. It seems that these tiny creatures let their opinions on the local bridge construction be known through nightly vandalism, much to the consternation of the local mason, Harn and his son, Pat. They also exhibit a marked appreciation for alcohol. 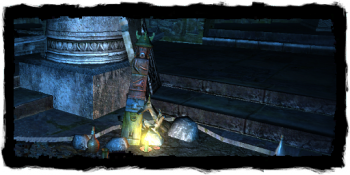