Hunting the Wild Hunt is an optional quest in Chapter IV which Γκέραλτ can receive from the Hermit in the Fields.

While speaking with the Lady of the Lake, Γκέραλτ learns that the Fisher King is not her only servant in town. The Hermit, a druid, is also part of her circle and happens to be an expert on the legend of the Holy Grail. He decides to pay the recluse a visit.

The hermit is an obliging fellow who is more than happy to satisfy Γκέραλτ's curiosity about the Holy Grail and the Lady of the Lake. In return, the witcher asks him if he is in need of the services of a witcher. Surprisingly (not!) he is. The hermit explains that the King of the Wild Hunt and his band of crazed spectres have invaded the fields trying to lure the spirits of the Lady's fallen champions, knights who are buried outside the hermit's hut in the kurgans, into their midst.

He tells the witcher that while he can not hope to kill the King of the Wild Hunt himself, killing nine of his wraiths, a sacred number to the druids, would send him on his way. These specters appear after dark, near the Druids' lantern in the south-eastern area of the fields, near the ravine. Γκέραλτ must use mandrake sprinkled on the lantern's flame to keep the King of the Wild Hunt at bay while he kills the nine minions.

Γκέραλτ does as instructed and makes quick work of the wraiths. He then goes back to see the hermit and collect his reward.

You can choose your reward in this quest. Possible rewards are: 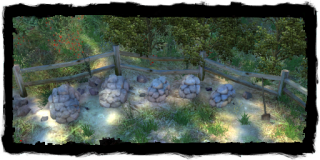 I defeated several wraiths, but I need to kill more if I'm to drive the Hunt away from the area. I have to defeat several more wraiths. (500 XP)

I lit the fire and the King of the Hunt no longer troubles me. I can now destroy the other wraiths.

I lit the fire and thus avoided having to face the King of the Hunt. I can now destroy the other wraiths.

I picked up my reward. The hermit was grateful. He also gave me some wraith-repelling salt. I received my reward. (