Hut on the cliff 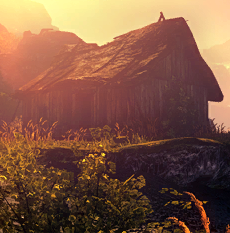 The Hut on the cliff is a location in Κεφάλαιο II of The Witcher 2: Assassins of Kings. It is Mavrick's childhood home. It is located near the beach, southwest of the Kaedweni camp.

The abandoned hut on the cliff had witnessed a monstrous event. The entire family inhabiting the home had died a bloody death in unclear circumstances.

There were many derelict settlements and farms in the area around Vergen. Some had survived in better shape than others.