The Kingslayers, also known as Assassins of Kings, are a mysterious organization made up of a handful of witchers from the School of the Viper in the service of Nilfgaardian Emperor Emhyr var Emreis. The organisation's task was to spread chaos in the kingdoms of the North by killing kings and sorceresess.

Most notable kingslayers were Letho, Serrit, Auckes and an unknown witcher from The Witcher outro. 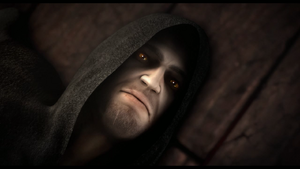 In The Witcher outro, Foltest, king of Temeria is attacked by a masked assassin, and is defended by Γκέραλτ. This assassin is very skilled and fights using two swords. The battle is pitched and the outcome does not seem at all certain, but at the last moment, Γκέραλτ throws his recently acquired coin purse at the villain. This ploy startles the assailant sufficiently to allow the witcher an unparried blow, which he lands with aplomb, severing one of the attacker's arms.

In the aftermath, both Γκέραλτ and King Foltest take a closer look at the villain's face which has now been unmasked. Inexplicably, the man appears to have the same eye mutation as Γκέραλτ. 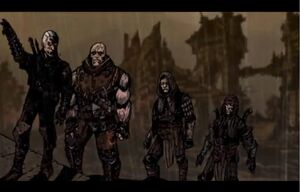 In the sequel, The Witcher 2: Assassins of Kings, the kingslayers return in their attempts to kill kings of the North. At least two kings - Demavend and Foltest - are slain as a result of their actions.

During the final conversation with Letho it is revealed that kingslayers are witchers from the School of the Viper in the south. The group was once saved by Γκέραλτ, and Γκέραλτ learns he turned over Γιενέφερ of Vergenberg to their care. They eventually made their way into Nilfgaard, where they were given a deal by the Emperor of Nilfgaard, Emhyr var Emreis, to destabilize the Northern Kingdoms by assassinating kings. In exchange, the Emperor promised to build a new witcher school for them. With the witcher schools destroyed and the training techniques and mutagens of old lost, Γκέραλτ, Letho, and the remaining witchers are a dying breed, the last of their kind. Letho agreed, and the witchers arrived in Aedirn. There, they were hired by Síle de Tansarville and Philippa Eilhart to assassinate King Demavend. Letho then assassinated King Foltest and had the other witchers attempt to assassinate King Henselt, hoping to pin the further murders on the sorceresses as well.

The ultimate fate of the Kingslayers is unknown. It is possible that after the deaths of most its members and an uncertain fate of its leader, Letho της Gulet, the organisation was dismissed and ceased to exist, although it is not confirmed.