Leo is one of the many young orphans of the Nilfgaardian War. Vesemir took him under his wing at Kaer Morhen and began training him as a Μάγιστρος about six years ago. Leo is not a full witcher, because has not undergone the mutations, but he is intent on working on his craft. He is eager and seems to want to be a witcher. 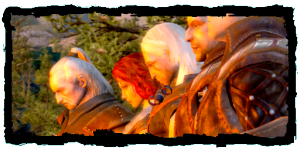 Learned by chatting with people in-game: