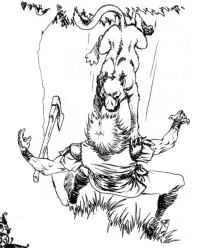 A leshy (Polish: Leszy, in English sometimes spelled Leshii or Leszi) is a forest monster that is described as something that "lives only to kill". When they kill something or someone, they do not leave much for the carrion eaters.

The leshy isn't described in any more detail in any of Andrzej Sapkowski's books.

In the Wiedźmin: Gra Wyobraźni PnP RPG, leshy is described as a forest-dwelling, iron-resistant, highly intelligent monster. For unknown reasons, many peasants consider him to be a spirit that protects the forest. In reality, it is a very dangerous creature that hunts woodland creatures and lone wanderers. It has the ability to polymorph. In its natural form, it is a wildcat-sized creature that looks like a cross between a wildcat and a bear, with mighty fangs and sharp claws. It mostly lurks among the tree branches, from which it quickly jumps on its victims. It usually devours the whole prey. Its mightiest weapon is the ability to shift shape. It can morph into a humanoid being that looks like a harmless, old man or into a tree branch that is practically identical to real ones.

The Leshy in The Witcher 3 is an ancient and powerful forest spirit. It has a deer skull as a head and tree-like limbs.[1]