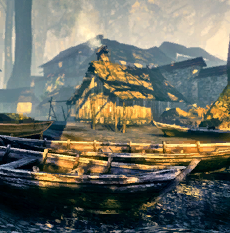 Lobinden is a small village just outside the eastern palisade of Flotsam in The Witcher 2: Assassins of Kings.

This small settlement nestled against the walls of the trading post was supposedly founded long ago by Aedirnian settlers. Even if true, this is of little consequence. Though the village was a complete backwater compared to the provincial outpost, Lobinden and Flotsam depended on each other because most of the area's fishermen, boat builders, tar-makers and hunters inhabited the settlement, providing products and services which no frontier community could live without. Elves and dwarves made up a large share of Lobinden's population. Tensions between them and the local humans were lower than in the trading post proper, as they were all united in their daily labors.