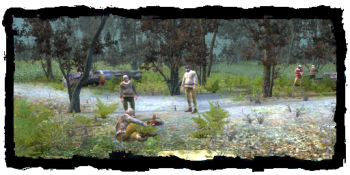 The Lumberjacks' glade is where Γκέραλτ meets Yaren Bolt, the leader of the lumberjacks in the area, who are busily cutting down the remains of a primeval forest of yews to supply the local wainscoting market. On any given day, the woodcutters, a ragtag assortment of men which Yaren rules with an iron fist, go about their business, hacking at wood or sitting around the campfire chatting about lumberjacks and cross-dressing.

One of the lumberjacks in the glade is willing to sell Γκέραλτ his possessions, which include a bottle of sodden mead, a red meteorite and a silver ring, for 200

if you haggle). He needs the cash to offset the income he will lose from logging if he goes home to be with his children who have taken ill. If Γκέραλτ does not yet have the Wives' Tears formula, he also throws that into the bargain.