Mystic River is a quest which spans Κεφάλαιο I‎, II and III of The Witcher 2: Assassins of Kings. 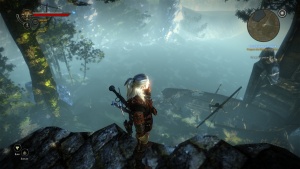 Wreck of the Petra Silie seen from above

This quest begins in a shipwreck in the Kayran's lair. Inside it there is a skeleton, searching it you find the captain's key (it is the captain's skeleton after all). That key opens a chest farther in the wreck. And in that chest you will find a journal, take it and bring it to Flotsam to put into the Royal Mail box.

For those looking for the Royal Mail, you can find it at Louis Merse's home (he is also the one you go to when you fulfill a monster contract). His home is located near the center of Flotsam, where the hangings took place. There is a door behind two vendors. Enter and head upstairs to Louis Merse. The Royal Mail is on his desk. You can also insert it in the Box in Loredo's residence. It is next to the entrance in the same room as the one you talk to Loredo in during the Indecent Proposal quest. It's unclear what difference, if any, this makes.

Κεφάλαιο I‎I:
You need to find the wreck of the Eyla Tarn in the ravines outside Vergen. If you're following Roche's path you only run into it during the quest "The Siege of Vergen". You run into a female troll who tells you some soldiers attacked her "old man". You can choose to fight her or let her go, it doesn't matter for this quest. In that same area is the ship. If you're following Iorveth's path you can visit the ship almost anytime. It is located in the southwest corner of the map behind the troll's lair and near the far-side of the old quarry. An optional quest (Baltimore's Nightmare ) will lead you there eventually. Once there, you need to loot the locked chest inside the wreck. Inside it there is a Vran armor enhancement. You can use it right there if you wish, but for the quest, save it until Κεφάλαιο I‎II where you need it to craft some epic armor.

Κεφάλαιο I‎II:
You need to enter the sewers beneath Loc Muinne. The right entrance is near the main market area, north of the Mighty Numa. The door is grey, metal and looks studded. Once inside, proceed down the stairs and follow the passage northwest at the first intersection. There may or may not be rotfiends in the passage way, but there are two bullvores at the end. After defeating them, loot the locked chest there to receive the Vran armor diagram and Armor of Ysgith. To complete the quest, find any craftsman to craft the Vran armor.

In the monster's lair, Geralt spotted the wreck of a large riverboat. Within its shattered hull lay a corpse which, as it turned out, was that of the boat's captain. On the corpse, Geralt found a key. Picking it up he instinctively looked around for the lock it might open.

The key the witcher found on the corpse matched a rusty chest nearby. In it, Geralt found the journal of the Petra Silie's captain, and a copy thereof packed for shipment to the University of Oxenfurt. Our hero concluded that the captain had intended to provide a report of his journey, but failed to dispatch the manuscript for unknown reasons. The witcher decided to do him that small favor using the Royal Mail that all Temerian officials could access. And who was, by the king's will, the ranking official in Flotsam? The answer to this question was simple.

Having read the captain's journal, Geralt noted that two boats had sailed the Pontar. Our hero felt he could well be lucky enough to come across the wreck of the second vessel. The witcher's hunches were rarely wrong.

Our hero concluded correctly that the captain had wished to give an account of his journey. However, he had not managed to send the manuscript off. The witcher decided to do it for him, using the Royal Mail, to which only Temerian clerks had access. And who was the ranking royal official in Flotsam? The answer was simple.

When Geralt found the post box, he thought that it could also contain secret information carried by special couriers. Loredo's letters would be interesting reading, so, without a second though, the witcher resolved to get his hands on the contents of the mailbox.

If Geralt persuades Louis Merse to let him look in the Royal mailbox:

Geralt found a letter to Viziman officials in the mailbox in Louis Merse's house. It suggested that Merse had contemptuously dismissed the charges of corruption, mismanagement, and colluding with bandits against Loredo. It seemed that Merse openly disdained his superiors in the capital, not fearing any unpleasant consequences. Geralt kept this fact in mind for future reference.

Above all, however, our hero placed the parcel from the Petra Silie's captain in the box. I can tell you it reached its addressee and it caused quite a stir, but that's a topic for another story.

If Geralt gains access to the Royal mailbox at Loredo's residence:

Geralt found a letter to one Dethmold in the mailbox in Bernard Loredo's mansion. It suggested that the commander had not been all that upset by Foltest's death, and seemed more interested in King Henselt's health. Apparently Loredo was colluding with the Kaedwinis and had far-reaching plans. The commander also apologized for his mother's behavior, which confirmed the rumors that she was… eccentric.

Geralt found the notes of the treasonous sorcerer in the wreck of the Eyla Tarn, which the local trolls had dragged onto dry land to use as their love nest. The mage wanted to get his hands on the archeological expedition's findings, which were being transported down river on the Eyla Tarn and the Petra Silie. There was a battle and the first ship, the renegade aboard it, was sunk. The witcher found smithing materials from the time of the Vrans along with the notes. He could put them to immediate use but the notes also mentioned a treasure hidden beneath Loc Muinne that, when combined with these materials, would produce Vran armor.

Geralt searched for quite a while, but he found the chest beneath Loc Muinne's streets. In it was a treasure that, when combined with Vran armor enhancements, could be forged into a marvelous set of armor. However, a sorcerer-smith was needed for that.

Finding an appropriately schooled craftsman was easier than Geralt initially thought. Bras της Ban Ard, a legendary sorcerer-smith, was present at the sorcerers' summit. For a moderate fee he made Vran armor for Geralt, so the adventure that stretched along the Pontar's current came to an end.

The ship wreckage that Geralt explores in the monster's lair is named after Petra Silie, a Witcher community forum moderator.