Radovid V the Stern is the current king of Redania. He is the son of Vizimir and Hedwig της Malleore, and thus a brother of Dalimira and Milena.

Radovid is mentioned then and again throughout the game, but in Chapter III, Γκέραλτ gets to meet the king face to face. Their first meeting is not actually "live" as Radovid's image is merely visible courtesy of a telecommunicator, Hartmann's mirror. Their second meeting is actually face-to-face and in the flesh and takes place at Radovid's hideout. He is then seen outside the city on the landing at the beginning of Chapter V. Their final meeting is in Old Vizima.

In the game, Radovid is attempting the same thing his father tried a couple of decades before: joining the royal families of Redania and Temeria. Because of this, he asks Γκέραλτ's opinion about Adda. He fostered a link with Salamandra through "mutual acquaintances", and at one point considered them a possible ally; however, he eventually discarded them. A mannered, calculating individual, he is more refined than his opposite number Foltest but no less ruthless.

If Γκέραλτ manages to break Adda's curse anew, there is a scene of the happy couple promising a bright future, and the union of the two kingdoms into one. If Γκέραλτ kills the striga, though, Radovid reigns alone in Redania. 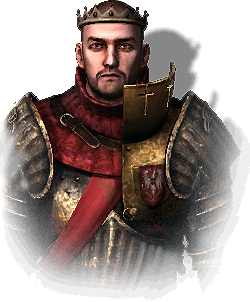 Radovid is a main character in The Witcher 2: Assassins of Kings.

"This child is a bastard." - Radovid when John Natalis declares Anaïs the rightful heir of Temeria during A Summit of Mages.

When Radovid's father, Vizimir II had fallen victim to an assassin a few years earlier, the prince had had but thirteen summers. The country fell into chaos, as usually happens in such circumstances, and queen Hedwig would not have been able to control things. The aristocracy, as they tend to – started to organize themselves into factions, attempting to tear something out for themselves. Some practically licked the boots of Nilfgaardian emissaries, doing so with much practice and a real sense of commitment. The Regency Council appointed to save the kingdom from the conflict managed to do so, and properly hung the traitors, yet its members disregarded their underage ruler. Therefore nobody among the Redanian nobles expected that Radovid would grow up to become a firm monarch who would repay all humiliations he and his mother had suffered during the regency. The king was quick to show that, if his father had earned the moniker of"the Just", he would be remembered by history as "the Stern".

If Γκέραλτ chooses Iorveth's path during the end of chapter I:

The sorceress Philippa Eilhart had the dubious pleasure of seeing the aptness of Radovid's moniker with her own eyes, so to speak. After presenting her with a list of charges, reinforced with personal animosity and information from the Imperial envoy, the king had her eyes put out. You might say that Radovid couldn't turn a blind eye to her sins.

Even before Γκέραλτ related his impressions of the discussion with Radovid to me, I already had an feeling that it would be best to avoid attracting the Redanian monarch's interest to my modest sΞωτικό. When Γκέραλτ ended up in his dungeon, the king unhesitatingly provided him with a list of arguments detailing why it was in Redania's national interest that the future be deeply unpleasant for the witcher and Triss. He did point out, however, that it was nothing personal.

Unlike the proud and sometimes sΞωτικό-centered Foltest, or the fitful, coarse Henselt, the king of Redania was a reserved, calculating politician. Γκέραλτ learned that he was not the sort of man that would allow himself to be deceived or led astray by prevarication. The king could instantly sense falsehoods and was gifted at maneuvering his opponents into revealing whatever information he desired.

Radovid had very specific plans concerning his neighbor, the chaos-riddled Temeria. With the prospect of another war against Nilfgaard looming, he and the Kaedweni monarch aimed to partition Temeria in order to forestall the Empire from acquiring its lands.

If Γκέραλτ chooses Roche's path during the end of chapter I:

Radovid wanted to use Γκέραλτ to recover Anaïs La Valette, King Foltest's youngest child. Although she was oblivious to the fact, the girl was a trump card in a high-stakes game. The prize: Foltest's legacy.

If Γκέραλτ chooses to give Anaïs La Valette to him:

Radovid had very specific plans concerning his neighbor, the chaos-riddled Temeria. In this situation Fate, embodied by a certain witcher and a military captain, had delivered Anaïs La Valette, Foltest's illegitimate daughter, into his hands. Thus the Redanian king had a strong argument that Temeria should be acknowledged a Redanian protectorate. Thanks to skillful political maneuvering, Radovid greatly strengthened himself and his kingdom's position.

If Γκέραλτ chooses to give Anaïs La Valette to John Natalis:

Radovid had very specific plans concerning his neighbor, the chaos-riddled Temeria. Yet Fate, embodied by a certain witcher and a military captain, had delivered Anaïs La Valette, Foltest's illegitimate daughter, into the hands of Temeria's regent, John Natalis. Radovid would have to find some other way to expand his dominion.