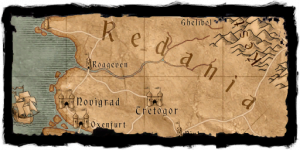 For ages, Redania has fought a customs war with Temeria, its primary rival in the North. The country possesses the best intelligence network in the world. The government of Redania is also heavily influenced by sorceresses.

King Vizimir II of Redania was assasinated during the Second Nilfgaard War. During the interregnum, the country was ruled by a Regency Council headed by Sigismund Dijkstra, the head of Redanian Intelligence.