Siegfried της Denesle is a knight of the Order of the Flaming Rose, bound by their traditions and technically a monk (he has taken a vow of celibacy).

Γκέραλτ first meets Siegfried in the Υπονόμους της Βίζιμα while they are both on the hunt for a dangerous cockatrice. The knight suggests that they join forces to defeat the beast (and deal with drowners), and Γκέραλτ decides whether or not to go it alone. Either way, after the cockatrice is slain, both Γκέραλτ and Siegfried are ambushed on their way to the surface by Salamandra agents. After these are defeated, Siegfried sarcastically asks whether they were friends of the witcher's, then on a more sober note mentions a friend who might be of service: Raymond Maarloeve, private detective.

Siegfried spends most of Κεφάλαιο II at his post (if he and Γκέραλτ joined forces in the sewers, this is the Order outpost north of the Cloister; if not, it is at the front entrance to Νοσοκομείο της Αγ. Λεμπιόντα), at one point making a brief excursion to the swamp - but first, he waits by the gate to the Vizima dike until he has helped Γκέραλτ past its guards. He can also be invited to Shani's party.

In Κεφάλαιο III he is posted before the Cloister's main entrance, and can be consulted regarding a couple of quests. He will not be encountered in Κεφάλαιο IV.

In Κεφάλαιο V and the Επίλογος‏, Siegfried is a key ally if Γκέραλτ has consistently supported the Order, but a sworn enemy if the witcher has thrown in his lot with the Scoia'tael.

Siegfried της Denesle, a knight of the Order of the Flaming Rose, is an idealist who adheres to the Order's rules but is not devoid of common sense. Polite and open, he is unlike many of his brothers from the Order in that he is not prejudiced. He is undeniably courageous and demonstrated this when he descended alone into the sewers to fight the cockatrice.

Siegfried and I defeated the cockatrice together. The knight proved both polite and a skilled swordsman.

I have a feeling Siegfried is starting to see through his own misapprehensions. He has realized that killing monsters will not eliminate all the evil of this world, and his duties towards the Order sometimes force him to choose the greater of two evils.

During the bank robbery in the Trade Quarter, I opposed Yaevinn and his forces together with Siegfried. The attack reinforced the knight's conviction that the Order's dislike of non-humans is justified.

I asked Siegfried for military support during the assault on Salamandra's headquarters in Vizima. The knight, who was among those invited to Leuvaarden's party, agreed to help me break up the organization.

if Γκέραλτ does not side with Yaevinn in Force Recon:

The knights led by Siegfried defeated the Scoia'tael during the clash in the Golem Burial Ground.

if Γκέραλτ chooses the Order path:

On the hill under the Old Manor, during the fight against Salamandra, my friend aided me again.

if Γκέραλτ chooses the Witcher / neutral path and decides to kill Siegfried.:

Siegfried της Denesle died by my hand when he stood between me and the Grand Master. He remained loyal to the Order of the Flaming Rose to the very end. 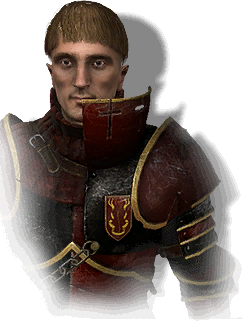 Siegfried της Denesle is a secondary character in The Witcher 2: Assassins of Kings. Depending on the Γκέραλτ's decisions in the first game, he is either dead, absent, or present in the Order of the Flaming Rose camp at Loc Muinne in Κεφάλαιο III, called upon by King Radovid V of Redania to oversee the security of the summit.

Order's path – Siegfried is still the Grand Master of the Order and thus keeps an eye on the safety of the meeting at Loc Muinne.

Siegfried believes in Γκέραλτ's innocence regardless of the path the witcher has taken and also states he owes Γκέραλτ too much to stand against him as well as talking about Radovid's ambition, the reformation of the Conclave and the Order's view on peasant rebellions.

During a talk with one of the Knights, Γκέραλτ learns that Siegfried still continues his monster hunting, but due to an overload of work he does it sporadically.

If Γκέραλτ decides to help Roche and then give Anaïs to John Natalis, Siegfried will allow them to depart in peace as opposed having to fight the Order's Knights.

If Γκέραλτ decides to give Anaïs to Radovid he and his knights will escort them as well as recommend to Roche that the Redanian colors would suit him.

The knightly caste should oblige its members to follow the path of honor, of certain rules and ideals. Unfortunately in our rotten times, many among the knighted, dismissive of the vows they made, are often more interested in their own privileges and chances to stuff their pouches. Compared to all those false knights, robber barons and other heraldic rabble, the House of Denesle stood apart like a lion among mongrels. Like his father Eyck of Denesle before him, the young Siegfried always followed strict moral rules in life and an iron code of honor, to the point that his devotion sometimes bordered on fanaticism. During our last meeting, Siegfried had served in the ranks of the Order of the Flaming Rose, and he played no small part in the events at that time in the capital of Temeria.

If Γκέραλτ chose the Order Path in The Witcher:

It was because of those past times that Siegfried made no objections and allowed Γκέραλτ to enter Loc Muinne.

If Γκέραλτ decides to give Anais to John Natalis:

Their friendship proved its worth for a second time when Γκέραλτ and Roche faced a patrol sent to bring Anais La Valette under Radovid's protective wing. Because the Temerian and the witcher's interests differed from the king's, bloodshed seemed inevitable – yet, remembering their friendship, the knight of Denesle conveniently "forgot" that he saw them in the Kaedweni camp.