Southern cave in the outskirts 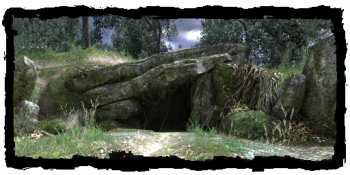 One of several caves in the game, the southern cave is the southernmost destination on the map of the outskirts. The cave itself is not much to look at, but as it turns out, there is an exit from the Salamandra hideout which leads directly to this cave. This is also the place where Abigail takes refuge when the Αιδεσιμότατου and his mob of fanatics try to lynch her for her perceived involvement in the appearance of the Beast.