The Ashes of Vizima

The Ashes of Vizima is a quest which is automatically received upon completion of Κεφάλαιο V; it launches the Epilogue. At this point, Γκέραλτ's Paths essentially converge; only the absence or presence of certain key players, whose lives have been impacted by Γκέραλτ's choices, varies. 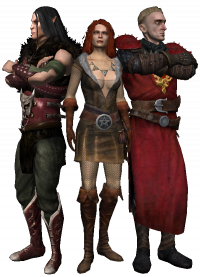 Having just found out that the Grand Master of the Order of the Flaming Rose is behind Salamandra, the witcher and his ally (either Yaevinn, Siegfried or Triss) head back to Vizima to inform the king. Γκέραλτ's path has already affected the political landscape in Temeria (and abroad) and those consequences are mentioned in his exchange with Foltest.

Politics aside, Γκέραλτ brings the king up to date on what he has found, and is urged to finish the job for 8000

(10000, less an appropriate amount of income tax). The witcher then sets out, still aided by his ally, to find the Grand Master at the Cloister and finally retrieve the stolen Witchers' Secrets. Along the way he encounters friends and allies, frightened refugees, mutant assassins, greater brothers and a zeugl.

I should follow this man. He may know a way through the building's cellar. The streets are too dangerous. I'll look for a passage through the cellars.

We're near the Cloister, but we can expect a savage fight before we face the Grand Master. We must break through to the Cloister gates.

The guards lie defeated. I'm almost there. Time to enter the Cloister. 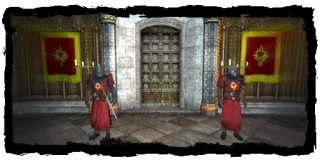