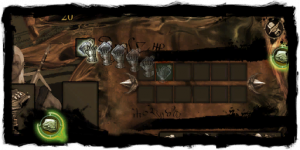 To access items, open the inventory by left-clicking on the satchel icon, or by pressing the I-key.

Tip: Drag and drop potions into quickslots to create shortcuts on the main screen providing quicker access to potions. 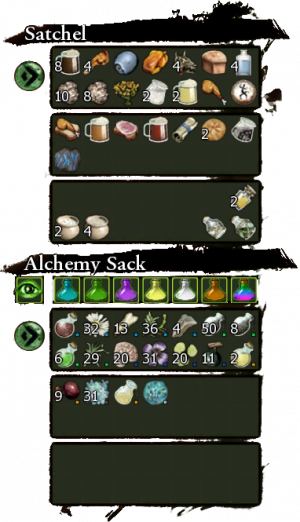 This is all the stuff that Γκέραλτ carries. Since the introduction of the Enhanced Edition, the main inventory has been divided into two sections: the satchel and the alchemy sack. The satchel is the main storage compartment in Γκέραλτ's inventory. It holds all the items which can be picked up, excluding Όπλα, Συστατικά and Αντικείμενα αποστολών. The alchemy sack holds all Βότανα, Ορυκτά‎ and Μέλη Τεράτων, except additional goods. Prior to the Enhanced Edition, Συστατικά were kept in the satchel and there was no separate alchemy sack. An image of that inventory can be found here.

The satchel is now divided into three sub-compartments (there were four), each has 14 slots, for a total of 42 slots. There is also a sort button to the left now to sort like items. This may or may not be helpful to you depending on how you like the sort. (For the record, I do not). It holds:

The alchemy sack has another three compartments the same size as the satchel, making for a further 42 slots. It also has a sort button and a very handy basic substance identifying button. It holds:

The new management system for the Συστατικά is a vast improvement over the previous inventory panel. Depending on your habits, it could take a bit of getting used to, but it works very well and greatly simplifies finding the Συστατικά you need. Overall, compared to the original inventory, there are now an additional 28 slots for general inventory, a 50% improvement.

Individual items may or may not stack. For example, rings do not stack, but necklaces and Συστατικά do. The maximum number of items in a stack varies.

Γκέραλτ's body functions as the fourth compartment of his inventory. It is where Όπλα, Πανοπλία and jewellery are kept or worn. For instance, his swords are strapped to his back, daggers are in a thigh-holster, and so forth.