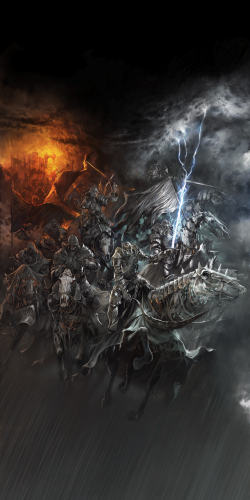 The Wild Hunt was a group of specters, led by the King of the Wild Hunt, which was considered to be an omen of misfortune and death. It was said to appeared mainly, but not exclusively during the winter.

The Wild Hunt was introduced to the Witcher Saga during Time of Contempt, first as a rumour which the royal messenger Aplegatt overheard and then a second time as the horde passed almost directly by Γκέραλτ as he and Νταντέλιον were in Hirundum, near Gors Velen.

Mysterious disappearances and reappearances of people who seemed to be suffering the effects of some sort of time dilation were also blamed on this group of spectres. These individuals seemingly returned to their loved ones often decades later than they had left, but having apparently not aged at all. In reality, the "Wild Hunt" were not spectres at all, but an elven cavalry lead by Eredin Bréacc Glas and known as the Dearg Ruadhri, or "Red horsemen" in Αρχαία Διάλεκτο. The apparent time dilations were due to the kidnapped humans being taken back to the world of the Aen Elle where time moved differently and then returned to their own world.

The King of the Wild Hunt appears at several points over the course of the game. This spectre seems to dog our hero's every step. He also seems to take pleasure in spewing twisted interpretations of past events.

"The Wild Hunt is a horde of specters that roams the sky during storms and is an omen of disaster. The appearance of the Wild Hunt foreshadows war and woe, much as a comet does. The spectral Wild Hunt sometimes appears in nightmares of the cursed or those touched by Destiny."

A book can be purchased on the topic of the Wild Hunt. Reading the volume adds to the journal entry.

According to tradition and eye witness accounts, the Wild Hunt abducts people, forcing them to join its mad gallopade on the sky. It's harvest is especially rich just before or during a great war, like a few years ago in Novigrad, when over twenty people went missing without a trace after the Wild Hunt passed. Some of the abductees managed to escape the cavalcade back into the world of the living, but the stories they told were so extraordinary that they were always considered insane.

Stories of the Wild Hunt do not appear in the dwarven and elven cultures. It is quite interesting, for the Elder Races must have faced the Hunt long before humans did. As it seems, the dwarves ignore everything on mutual terms, while the elves are mysteriously silent on that subject.

Sorceress Γιενέφερ of Vengerberg was abducted by the Wild Hunt, just like witcher Γκέραλτ της Ρίβια. Her fate remains unknown, though she certainly did not join the host of wraith horsemen, unlike her lover who was one of the Hunt's riders for some time. The motivation of the gallopades leader, the King of the Hunt, remains, as always, unknown.

According to the Nordlings, the Wild Hunt is a procession, or rather a cavalcade of skeletal horsemen. They rush across the sky on the bony remains of steeds. Clad in rusty remnants of armor, they wear jagged swords at their waists. Like comets, the Wild Hunt is an omen of war, which has been confirmed beyond all doubt. The spectral cavalcade ventures out in search of victims every several years, but its harvest was never as rich as just before the last war with Nilfgaard, when over twenty souls went missing in Novigrad alone after the Hunt passed through. Curiously, elven and dwarven legends make not the slightest mention of the Wild Hunt.

One of the insane asylum's patients claimed to have been abducted by the Wild Hunt and taken to a world where unicorns saunter about lush elven gardens. When he finally succeeded in escaping the Hunt's grasp, he returned to this world only to find that his children had aged and died, so many years had passed...

According to the notes of a sorcerer, who spent his entire life studying the phenomenon of the Hunt, there is a mysterious power behind the wraith host's incursions into the world.

Philippa Eilhart also has a theory about the origin, motivation and essence of the Wild Hunt. It is a surprisingly shallow theory for such a learned woman and not worthy of mention next to such illustrious deductions as the ones above.

Síle de Tansarville showed absolutely no interest in the spectral riders of the Hunt. This was puzzling to say the least given her reputation as a very learned sorceress.

There are more opinions about the Wild Hunt than there are stars in the sky. Some claim the Hunt is a retinue of the specters of knights who perished in various worlds. Others think the phantoms were created by a powerful force that sends them out into different worlds in search of slaves.

Astronomical observation can be used to calculate the frequency of the Wild Hunt's appearances. This seems to confirm the hypothesis that the spectral riders come from another world.

Mages remained silent about the Hunt, as if beset by a hoard of tongue-hungry cats. This silence from so many learned minds was as telling as words, but you'll not learn any more on this subject from me within this tale.

The poem "The Song of the Hunt" is a book as rare as hen's teeth, and a pile of rubbish about the Hunt at the same time. Experts on the subject are willing to kill for that item, but fortunately there are not many of them. The multilayered narration sends the reader into the world of the author's rich imagination where each verse equals another interpretation. Truth mingles with fantasy in that work, but there's nothing of interest there for one researching the Hunt.

No poem can remain vague when interpreted by a consummate poet. Master Νταντέλιον thinks that "The Song of the Hunt" symbolically describes how the cavalcade enters our reality from another one. It means that the wraiths of the Hunt are the inhabitants of another world, not necessarily the world of shades, who use the primordial magic of chaos and entropy. The poem, however, fails to explains the reasons they might have for such journeys.

Aramil, an elf from a parallel world, was pursued by the spectral riders to Loc Muinne, where he found a moment of respite. He left a missive according to which the King of the Hunt desires to fling open the gates between the worlds for all time, so that chaos and terror might reign in our world as well.

What is the Wild Hunt in reality? A cavalcade of riders from a world dominated by elves, riders able to travel between different dimensions. The so-called wraiths are these elven warriors' spiritual emanations. They serve a powerful race and even more powerful individuals, whose knowledge of magic and skills in this domain far exceed those of the human and elven mages of our world.