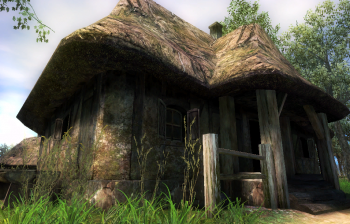 a hut to call one's own

The witcher's hut is a hut that Γκέραλτ can obtain by completing the side quest Hunting the Wild Hunt in Κεφάλαιο IV of The Witcher computer game.

Though the hut sounds promising, unfortunately it is not nearly as useful as it could be, though you do find a couple useful items within the hut after you accept it as a reward.

After completion of the Hunting the Wild Hunt quest, if you ask the Hermit to explain the rewards again, he will mention that you can store items in the hut. This is not possible. The hut also features a fireplace which does show as targetable, but can not be used for meditation, thus also ruling it out as a safe house for meditation and combat preparation.

Owning the witcher's hut has no effect on the storyline at all.