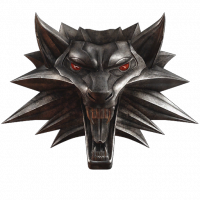 The Witchers' medallion is a silver symbol of the Μάγιστροςs' profession. It is sensitive to magic, vibrating and tugging on its chain when spells are being cast or magical beings, like genies, are present. This magic medallion shaped like a wolf's head is given to every young witcher candidate who has passed the Trial of the Grasses. The origin of the first medallions is unknown, though it is assumed they were made in the magic forge at Kaer Morhen. The medallions vibrate in response to magic in all its forms, including curses, charms and spells. They also warn of lurking monsters born of magic or magic experimentation. 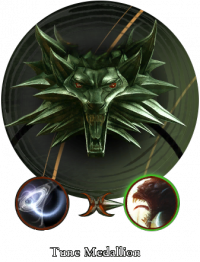 In The Witcher, Γκέραλτ's medallion can be tuned to detect either monsters or Μαγεία. This particular screen can be found while Γκέραλτ is meditating, by clicking on the Inventory icon.

If the medallion is tuned to detect magic, then it will vibrate in the same manner when in proximity to a Πεδίο της Δύναμης.

Finally, the ring around the medallion in the game interface (upper left corner) shows the icons for active effects and a progress bar for XP.

The medallion emits an audible vibration when in the presence of magic. It can be used when energized, as indicated by a pulsating yellow aura. Using the

causes the medallion to highlight items such as herbs, Τέρατα, Μέλη Τεράτων and containers in orange, and Circles of Power in red; this function is extremely helpful in cluttered and overgrown areas. Surrounding the medallion are the player's various level indicators: