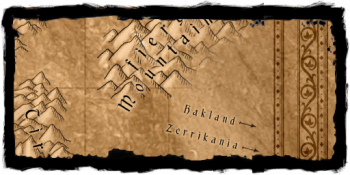 Zerrikania is a mysterious land located in the south-eastern part of the Ήπειρο. Its name is said to derive from a legendary golden dragon, Zerrikanterment. The Βόρεια Βασίλεια have very little to do with that realm. Not a lot is known about Zerrikania: its climate is hot, exotic animals roam the land, and the inhabitants worship dragons. Zerrikania is famous for its tattooed warrior women, who are skilled in the use of sabres.

The coat of arms for Zerrikania is not actually described in the novels. This particular coat of arms was designed by our resident heraldry and Witcher expert Mboro. 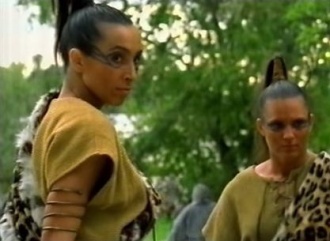 In the "Granica możliwości" Κόμικς:

A more detailed description of Zerrikania and its history was created by Martyna Tomaszewska for the Wiedźmin: Gra Wyobraźni role-playing game and published in the "Magia i Miecz" magazine (published by Wydawnictwo MAG, the publisher of the game). According to the RPG, Zerrikania's name comes from the name of the legendary dragon Zerrikanterment.

Zerrikania is not visited in the game, but it is acknowledged as the home for the formulae of βόμβες, and famous for its alchemists. The descriptions offered suggest that Zerrikania is very much like Africa.

"Zerrikania, home of the venomous Basilisk, has given birth to other equally hideous creatures. Among them are spotted spiders so huge that they trap elephants in their webs and the no-less terrifying tse tse flies. The flies are especially repulsive, laying their eggs in the human body, the resulting larvae maturing within the host's head. The victim's brain serves as sustenance and when the larvae turn into adult flies, they leave the body through the eye sockets, now void of the previously devoured eyes."

The only Zerrikanian characters to appear in Andrzej Sapkowski's Witcher series are Tea and Vea from the "Τα Όρια των Πιθανοτήτων" short story (in Το Ξίφος του Πεπρωμένου short story collection). Aside from that, there were only a few mentions of Zerrikania in the books.